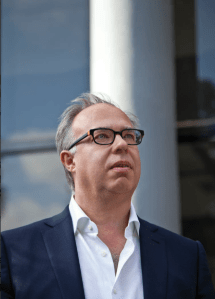 “Just once, I’d like to go to a gala that goes completely wrong, where things catch on fire,” said Massimiliano Gioni, associate director of the New Museum. He was chatting with curator Cecilia Alemani, his wife, and Tom Eccles, the executive director of the Center for Curatorial Studies at Bard College, about the New Museum’s flashy fundraiser the night before at Cipriani. “It’s not out of the cards,” said Mr. Eccles, who was hosting his own institution’s gala dinner that evening in Capitale, another Beaux-Arts bank turned event space. It was only the cocktail hour. The night was young, and filled with flammable décor.

Artist Lawrence Weiner arrived early, looking every bit the affable pirate in an unbuttoned white shirt. He wore two gold hoops in each pierced ear. I told him I’d had lunch with two architects earlier that day, and asked him what he thought about the MoMA-Folk Art Museum debacle.

“It’s an asshole, necessary move,” he said of MoMA’s plans to tear down the building designed by Tod Williams and Billie Tsien. “It’s necessary to make that museum all it needs to be, but it’s an asshole move.”

“I thought they did that months ago,” said artist Rirkrit Tiravanija of the demolition. Told that they hadn’t, he adopted a Zen stance on the matter: “It’s already demolished,” he said.

His art dealer, Gavin Brown, took a similarly philosophical tack: “We’re all turning into dust,” he mused. And the Picasso mural in the Four Seasons, which might turn to dust sooner rather than later if Aby Rosen gets his wish and removes it? “Whatever Aby Rosen decides to do,” Mr. Brown said, “we’ll all be fine.”

Eventually, the crowd of guests corralled within the venue’s antechamber, a regal hall lined with butterscotch yellow marble columns, bled into the vaulting dining room and took their seats.

When he took the stage to receive the Audrey Irmas Award for Curatorial Excellence, Mr. Esche began modestly before also tackling some hard-hitting topics: “I said to Tom, when he first asked me if I wanted to accept the award—which I thought about for two seconds before saying yes—nobody will come to the event, so could we do it in The White Horse Tavern, where Dylan Thomas had his last drink before he died? A cozy table for 20?”

The grand room, was, in fact packed with more than 100 guests. Filling the tables, were art world personae including historian and dean of the Yale School of Art Robert Storr, artist Rob Pruitt and Artforum publisher Knight Landesman.

“I’m kind of frustrated by the art world at the moment and I want to mention why,” Mr. Esche told them, citing a lack of curatorial collaboration and dialogue. “Often I see bricks lying next to each other… I get frustrated that we can’t build. That we can’t lay our bricks on top of one another.”

This lack of cooperation, he said, has some dark implications. “The danger is that we’re going to stay where we are and become more racist and xenophobic,” he said. “That’s my little plea, and I thought I’d take advantage of it. Tom said I shouldn’t say anything but ‘thank you.’”

While it’s hard to imagine the rakish Mr. Eccles advising anyone against outspokenness, it wasn’t Mr. Esche he had to worry about. Dinner was accompanied by a nearly 20-minute address from Leon Botstein, the president of Bard College. Within the first six minutes he’d touched upon Nazis, Venezuelan kidnappings and Hungarian genocide. From there, highlights included bootleg liquor and Passover Seder.

Apparently, though, it was nothing compared to years past. At the 2008 edition iteration, during the financial crash, Mr. Botstein reportedly called out the “money grubbing guys on Wall Street,” and some wealthy patrons stormed out in a huff.