Mayor Bill de Blasio has delayed the release of his flagship affordable housing plan, which he had promised to unveil by May 1, to focus on negations over a reported deal with the city’s teacher’s union that could be announced as soon as Thursday.

The mayor had been expected to reveal the specifics of his ambitious plan to create and preserve 200,000 units of affordable over the next 10 years in a widely-anticipated speech tomorrow. But this evening, administration sources confirmed the announcement had been postponed so the mayor could continue labor discussions.

Sources said the city is close to reaching a deal with the United Federation of Teachers–although the details remain unclear. The New York Times reported this evening that the city is on the cusp of a nine-year contract with the union and that the mayor cleared his schedule to hammer out the final details.

A UFT spokesman declined to comment except to say that, “Negotiations are ongoing.” The union’s president, Michael Mulgrew, and his lawyers, were still at work on the deal shortly before 8 p.m.

UFT members have been working without a contract since 2009 and the union has been pushing for retroactive pay raises that could cost the city more than $3 billion. The deal could also set significant precedent as the mayor works to hammer out deals with the city’s more than 150 other municipal unions, which have all been working under expired contracts.

Many advocates were caught off guard by the housing announcement delay, which was first reported by Crain’s New York Business.. Even after the news broke, housing experts continued to flood reporters’ inboxes offering commentary on the plan.

This is the second time the Mr. de Blasio has delayed the release of a major report. Earlier this month, he missed a self-imposed April 11 deadline for revealing his plans for Hurricane Sandy rebuilding, instead releasing its findings at a press conference on April 17. 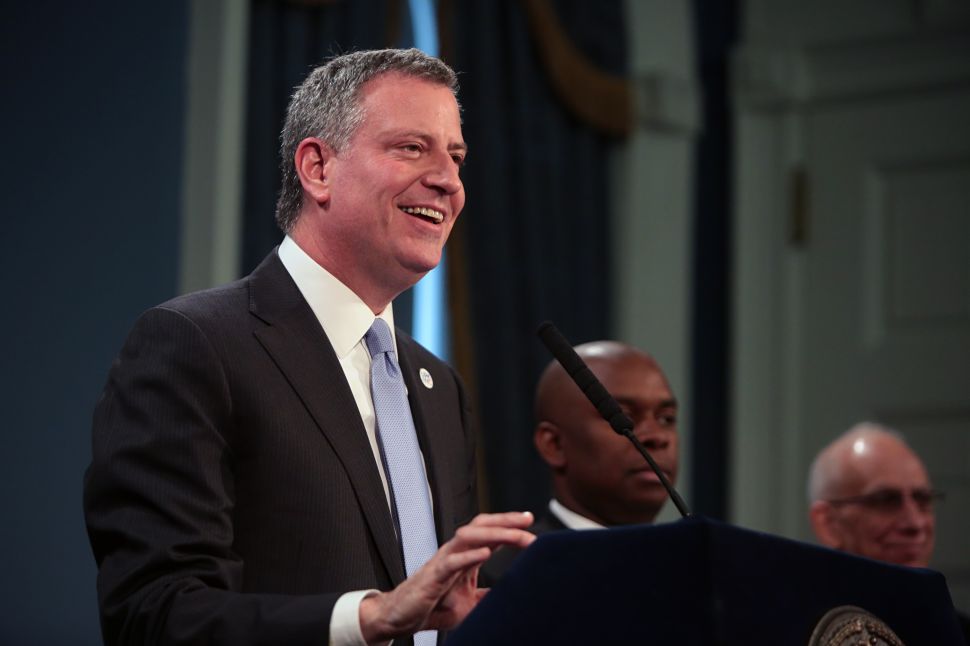