Mayor Bill de Blasio–who made easy access to public information a centerpiece of his role as public advocate–today sidestepped questions about the city’s handling of Freedom of Information Law requests.

Late Friday, Mr. de Blasio’s administration responded to requests filed by the Observer and other outlets seeking records of email communications between him, his staff and police following the arrest of an early campaign supporter, Bishop Orlando Findlayer, who was spared a night in jail following a personal call placed by the mayor.

Initial reporters about the incident, which the administration has never refuted, cited emails exchanged with the police–but the requests filed by media outlets turned up no results. Other requests made for the police report have yet to be responded to weeks after the required deadline.

But speaking today to reporters, Mr. de Blasio was vague when asked about the delays.

“The FOIL process–I am not a lawyer, but the FOIL process is delineated and is pursued whenever a request comes in. What we have said to our team is: Process those, get the answer back. Obviously, if at any point, a journalist or any other organization isn’t comfortable with the outcome of the FOIL request, there is an appeals process. So I’m not familiar with the details of it, but that’s the way it works,” he said.

“There’s a FOIL process. I am not a lawyer. There are lawyers who do this with great care and I’m sure they followed the appropriate  rules. And at the end of that process people aren’t satisfied, there is an appeals process,” he said, refusing to respond to a question about whether no emails were indeed sent.

“Again, I don’t comment on the details of the FOIL process,” he said. “I let the lawyers do that.”

As public advocate, Mr. de Blasio had been a champion of open record laws, even publishing an extensive report calling out the previous administration for delays and difficulties. 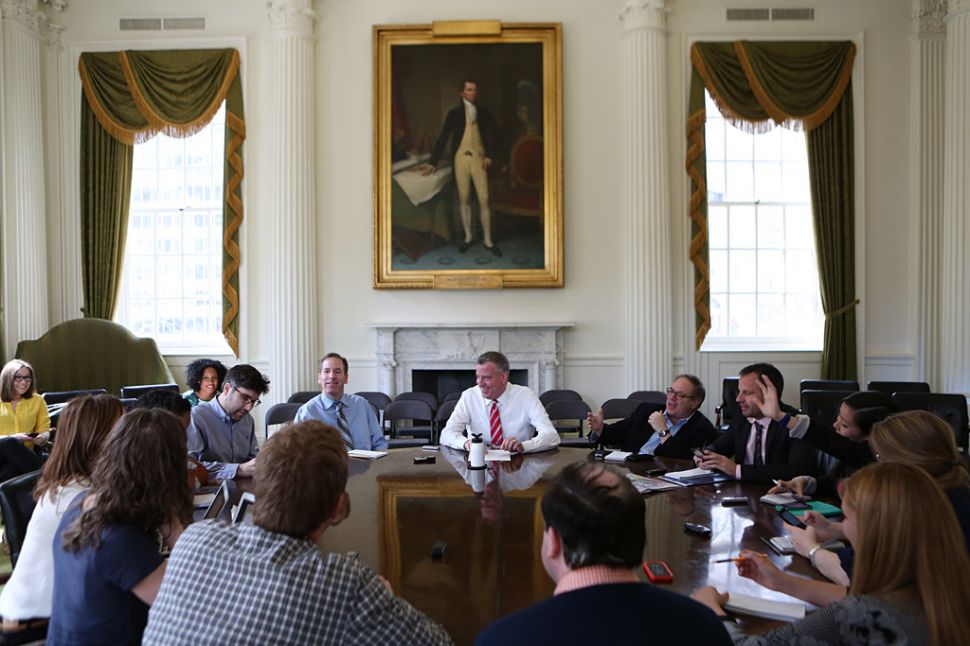