“Basil Paterson’s one of the people who really created the reality we now live,” Mr. de Blasio told the crowd. “In terms of some of the best most, most progressive, most important developments, he played such an extraordinary role.”

Mr. Paterson and Mr. Dinkins were members of the “Gang of Four,” the Harlem political powerhouse that dominated for decades. Though the loss of Mr. Paterson leaves the Gang of Four with only two surviving members, Mr. de Blasio said he owed his career to some of these earlier leaders.

“I don’t think I would be in this position today, if it weren’t for you,” Mr. de Blasio told Mr. Dinkins. “I don’t think I could have done the things I did, if you had not been willing to hire a young impressionable [Columbia School of International Affairs] graduate … I want to thank you for being an inspiration to me and for having opened that door for me.”

Mr. de Blasio also took the occasion to retell one of his favorite stories: how he met his wife, Chirlaine McCray. “I worked for Mayor Dinkins one day, and a young woman walked up to me working in the City Hall press office, I had never seen her before, she asked me for some information, I looked up her, and–as I like to say–I heard violins, I heard angels singing,” he said. “And because of Mayor Dinkins, I met my wife of now twenty years.”

Looking forward, however, Mr. de Blasio said he hopes to build on his predecessors’ achievements, namely improving relations between New Yorkers and their police force, and using green jobs to build back the city’s economy.

“We have to see environmental sustainability in the same vain as economic sustainability,” he said. He advocated hiring local companies to retrofit buildings in their neighborhoods with green energy systems, and allocating Superstorm Sandy recovery funds to businesses in afflicted areas.

“Let’s use that money to hire people affected by the storm to fix their own homes, their own neighborhoods,” he said. “In the vain of our young people in neighborhoods like Williamsburg and Bushwick, we’ll do it ourselves.” 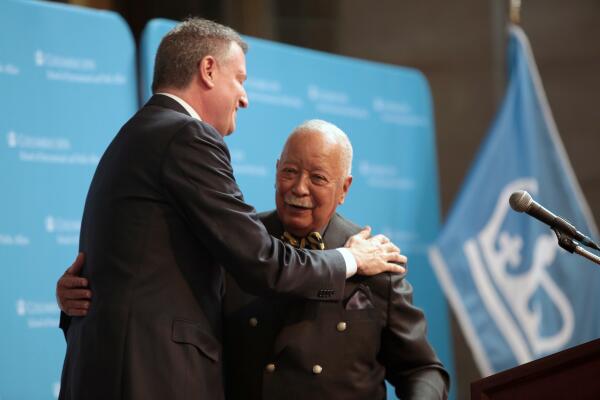