Mayor Bill de Blasio is quite pleased with his strike-out pitch yesterday–and the positive front-page it earned him in the often critical New York Post.

Asked today during a roundtable discussion with reporters at City Hall “if you ever thought you’d be on the front page of the Post, in a Mets jersey, after having thrown a strike,” Mr. de Blasio, a die-hard Red Sox fan, seemed to be in genuine disbelief. “This is kinda surreal. I agree. There’s levels of surrealness here that are hard for me to take in,” he said as he looked at a copy of the paper, supplied by its City Hall bureau chief.

“I think it is a real statement on the Mets and the challenges that it was enough to generate a positive New York Post cover for me,” he added. “Because really, you know, I mean there is a sort of logic pattern here. At least Bill can throw a strike as Mets blow it, right?”

Past covers of Mr. de Blasio in the tabloid include a cartoon of him as a school yard bully during his fight over charter schools and one that placed his floating head over a red background next to the headline, “Back in the USSR.”

Mr. de Blasio threw the opening pitch at yesterday’s Mets season opener. And even though he was booed like many of his predeceessors, he managed to land a strike.

The mayor hailed the day as “an amazing experience” and revealed that he once dreamed of playing ball before he got into politics.

“I truly spent a lot of my youth wanting to be a professional baseball player. I never got there. I never even got close. So to stand there with them was pretty amazing,” he said, hailing his catcher, Travis d’Arnaud, as “my main man.”

“Great battery mate. Framed the pitch beautifully. He was really fun,” gushed the mayor, sounding slightly star-struck. “Was great talking with him afterwards. Really cool guy. And it was an amazing experience.”

“So could I have ever imagined this? There’s a lot of things about this picture I could not have imagined,” he added.

As the roundtable was ending, Mr. de Blasio made one last reference to the victory when asked by a reporter whether he felt more comfortable conversing in a causal, roundtable setting than at a press conference podium.

“After throwing that pitch, I can do anything,” he said. 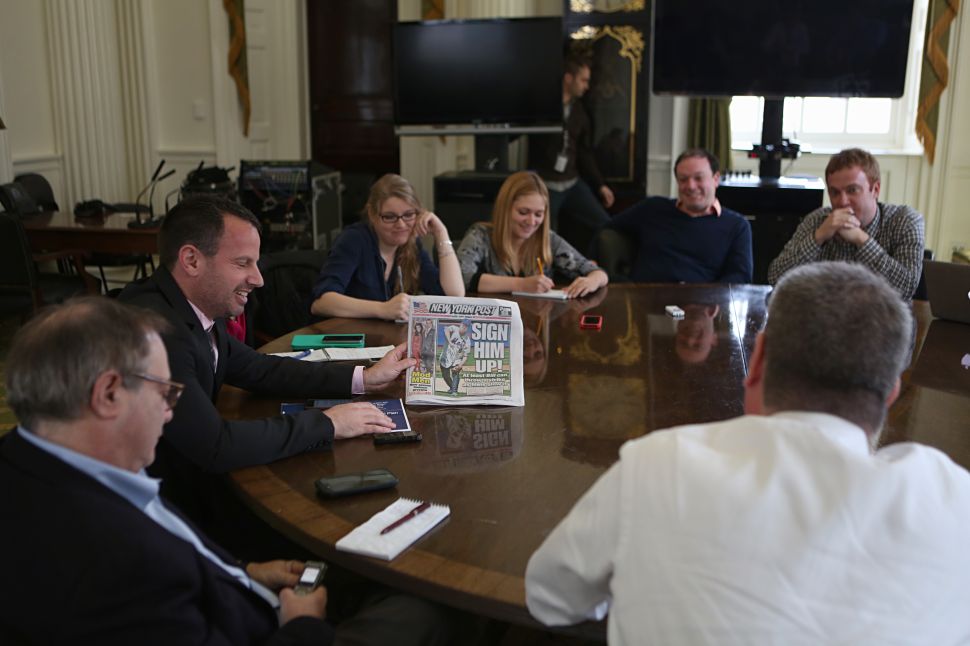