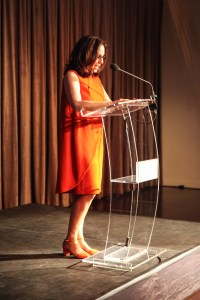 Last night, in a gala celebration at Tribeca Rooftop, the New York Foundation for the Arts (NYFA) honored the Ford Foundation, along with three NYFA grantees—writer Terry McMillan, dancer and choreographer Dwight Rhoden and Deborah Kass, the visual artist best known for her queer and feminist-inflected appropriations of works by Andy Warhol. For anyone interested in Ms. Kass’s artistic development, a highlight of the evening was her acceptance speech, particularly the second half of that speech, her thank yous, which she prefaced by saying, “Since this is as close as I’m ever going to get to an Oscar, I would love to take the opportunity to say thanks. So you have to bear with me. I don’t want the music coming on.”

“First and foremost, to [film producer and close Warhol colleague] Vincent Fremont, for being there at a critical time. To [Warhol Museum director] Eric Shiner…a lifechanger, no words can thank you enough, Eric. To Paul Kasmin and everyone at Paul Kasmin Gallery. To Mrs. Johnson, my kindergarten teacher, who wrote my first great review, on my report card: ‘Debbie is very good at art and gym.’ To Charles Schulz, my first favorite, great artist, who answered my many fan letters, and kept all the drawings that I sent to him as an ambitious nine-year-old. Thank you, Mr. Schulz, for advising me, and I quote, ‘Keep at it, you never know where it will lead.’ To MoMA and the Met, for being the best possible art education for a strangely obsessed, driven, and weirdly determined teenage girl from Long Island. To the artists who positively thrilled me as a kid with their subversive and completely disruptive genius: Lucille Ball, Tex Avery, Carol Burnett, Doctor Seuss, Harvey Kurtzman, and all the artists at Mad magazine. Later, for all the exact same reasons: Cezanne, Guston, Pollock, Andy, Louise Bourgeois, Alice Neel, Frank Stella, Eva Hesse, Adrian Piper, Barbara Kruger, Sherrie Levine, Cindy Sherman and my hero Elizabeth Murray. To the art historians I revere, who inspired me, and then honored me by writing so insightfully about my work: Rob Storr, Linda Nochlin, Irving Sandler, Griselda Pollock, and the late, great Robert Rosenblum. To all my muses, especially Jonathan Schwartz, Cornel West, Ryan Murphy, Naomi Klein, Stephen Sondheim and Auntie Mame. To my role models: Barbra Joan Streisand, Hillary Rodham Clinton, and my Grandma Jeanne Koufax, who said to me at least once a week on our daily phone call, ‘Debbie, I’m a fighter, and you take after me.’ To [Ms. Kass’s partner, the artist] Patricia Cronin, who fights the good fight every day in her studio right next to mine. Without her, art and life would be unbearably lonely. To friends and family who have kept me sane for decades. To every collector who has ever paid money for women’s work, especially now. To NYFA and to all those already mentioned and to everyone who has said a kind or encouraging thing to me in the last 40 years. I would not be here without you, so thank you very much.”