A SWAT team swarmed a Long Beach home expecting the aftermath of multiple shootings and a hostage situation. What they found was a teenage boy playing video games.

More than 70 emergency responders including police, MTA officers, firefighters and Nassau police ambulances responded to a 3:00 pm call from someone claiming to have shot his mother and brother inside a Laurelton Boulevard house yesterday, Newsday reported.

Authorities believe the fake call came from someone 17-year-old Rafael Castillo defeated in Call of Duty and are calling the hoax an instance of “swatting” — a trend where culprits make fake calls to trick emergency services, often for revenge.

The boy’s mother, Maria Castillo, 54, was in the kitchen when she heard authorities shouting “Go!Go! Get out!”as they surrounded her home with weapons drawn.

She went outside as officers asked her if there was a shooter inside. Fearing for her child, “she kept saying, ‘My son, my son,'” Long Beach Lt. Mark Stark told Newsday.

Authorities spent the next 20 minutes calling Mr. Castillo who reportedly didn’t pick up because he was playing the game. He eventually answered a call from his older brother, Jose Castillo, 21.

The SWAT team searched the residence and gave the “all-clear” at 4:30 pm.

Authorities suspect the call was a hoax because it was made via Skype, not a phone, to the departments office number rather than 911, which has tracking capabilities.

The culprit could be charged with falsely reporting an incident and billed for a $100,000 emergency response. 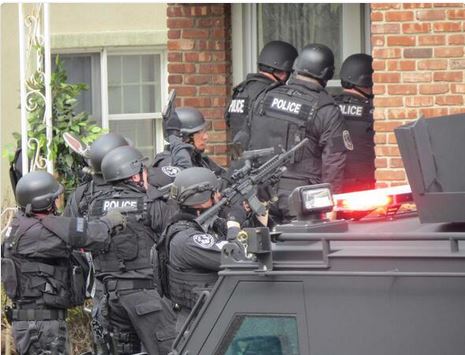