Humor is a unique art form when it comes to its position on authorship: while there are clear (or clear-ish) boundaries for what constitutes copyright infringement for a book or movie, comedians steal each other’s material all the time. It’s never “Oh, Carlos Mencia was just doing an homage to the work of Joe Rogan,” or “That South Park episode with the Inception bit was merely paying tribute to the earlier works of CollegeHumor.” While a timeline of “Who did it first?” can usually be established, unless it’s a word-for-word rip-off, there’s always the possibility that two separate groups thought the same “tiny hats” joke was funny.

We find that a little bit more difficult to swallow in the case of this Portlandia sketch airing tonight, called “Disappointing Gay.” In it, Queens of the Stone Age’s Josh Homme and Nick Swarsdon play a gay couple whose lack of fierceness is a let down to Carrie Brownstein.
[protected-iframe id=”0448cf847bd48b2e504e2405a36d38d7-35584880-35147716″ info=”http://c.brightcove.com/services/viewer/federated_f9?isVid=1&isUI=1″ width=”480″ height=”270″]
Google “Disappointing Gay” however, and you will find the YouTube show “Disappointing Gay Best Friend,” a series of very viral web videos made by Flavorwire editor Tyler Coates and Mikala Bierma in 2011.

[youtube http://www.youtube.com/watch?v=ihBpU7W4xlc&w=560&h=315]
Disappointing Gay Best Friend was written up all over the Internet; the probability that someone working on Portlandia saw the sketches at some point is pretty high.

While the similarities are blatantly there, from the sketch’s title to the color of Homme’s hair, I can’t say I was very upset to see the clip. It was certainly an odd experience, but I hate to be presumptuous enough to suggest that the Portlandia writers were ripping off our idea (although I will say that a quick Google search might have influenced them to go with another title).

Mr. Coates is even generous to allow that having a Disappointing Gay sketch on Portlandia is ultimately a good thing.

Did we invent this concept? Probably not, so I’m not too pissed at Fred Armisen and Carrie Brownstein for lifting it for their series. And even though the two-and-a-half-minute clip feels long (which is a lesson we did learn when making Disappointing Gay Best Friend: no Internet video with a single joke needs to be longer than 30 seconds), it might very well be successful in that it’ll reach a larger audience and make them consider the stereotypes that are still perpetrated about gay men: that they’re all the same. That we aren’t is the point — not that any one of us is more “realistic” than any other.

Still, when they make the inevitable spin-off series, I’d like to see a “Created By” credit for Mr. Coates and Ms. Bierma. 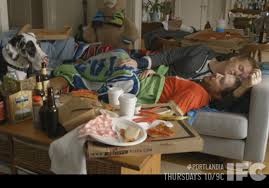