In Australia, the Duchess of Cambridge is swinging a cricket bat, and in the U.S., Tori Spelling is either suffering a nervous breakdown over her husband’s affair or staging one (as some have speculated, the two staged may have staged the affair) for the purpose of promoting her book and their new reality TV series. Gwyneth Paltrow’s uncoupling and Lindsay Lohan’s unraveling are old news. Paul Simon’s domestic troubles are “trending”. And talk about trouble: Who in America doesn’t now know the name of Donald Sterling? And for all his billions, who would want to be that man this week?

Six thousand miles away, in a country few of us could locate on the map—though it’s the most populous nation in Africa, and the seventh most populous on the globe—234 school girls were abducted two weeks ago by radical Islamic terrorists and have now disappeared. They were taken from their classroom at the only remaining school in their country where a young girl could still receive a Western education, and transported in trucks to an unknown place where, we have recently learned, they have been married off to their abductors or sold into slavery. For a Nigerian girl, these are one and the same.

Still, our attention remains on the doings of movie stars, athletes and royalty. The search that transfixed us, and no doubt involved the expenditure of millions of dollars and thousands of person-hours, was the search for the missing Malaysian airliner, for whom no hope of rescue existed. Nobody seems to be searching all that hard for the 234 girls.

And then there is Donald Sterling—a man whose name I didn’t know a mere six days ago. Today, I could recite what he told his girlfriend regarding that infamous basketball game. We know the name of the girlfriend too, and the punishment Sterling has now received. As much as America loves stories of the fabulously rich, what we love even more are stories of the fabulously rich brought to their knees, stripped –if not of their wealth—of their status, reputations, and in the case of Donald Sterling, the ability to occupy, ever again, a courtside seat (or even one in the nosebleed section) of any NBA game, for the rest of their days.

I have to admit: I read this stuff. I look at clips of reality television stars behaving badly.  I don’t eat junk food, but I consume junk news. Then, in among the garbage, a piece of something real and important floats by, easily missed, because nobody’s making that much of it. Two hundred and thirty four Nigerian girls, who dared to seek out an education, even though they knew this was dangerous, and that every other school in their country that might have educated girls like them had closed down out of fear of the very acts that have now befallen them. An attack near the capital by Boko Haram killed dozens on April 14. (Getty Images)

No photographs exist of the abduction (though there was one, on the Internet, showing a different group of girls, in their uniforms, at a different school that no longer exists: Hopeful, eager girls, who coveted books and knowledge the way some American girls covet skinny jeans and iPhones.)

In my mind I can see them: led into the backs of pickups, packed tight as cattle, with no idea where they were going but the certainty that it was someplace unspeakable. What we do get—from the British press, mostly—are photographs of the wailing mothers, the fathers and uncles who have pooled their resources to gas up their motorcycles and head into the bush in search of these girls. And what are they supposed to do, if they find them?

The United States government—so quick to step in elsewhere on the globe, when oil has been at stake—remains silent. “Maybe Oprah’s doing something about this,” someone speculated on my Facebook page this morning, when I brought it up. That’s who we have, in the absence of political or moral leadership: another celebrity with vast resources, who happens to be African American. Next one we’ll call on may be Captain America.

But I have another idea, and it circles back to this week’s fallen man: Donald Sterling—the all-powerful billionaire who has lost everything (everything but his money; something tells me the girlfriend’s history) over his remarks regarding African Americans.

America loves only one thing more than to watch a man like Donald Sterling fall, which is watching a fallen man – Bill Clinton, Robert Downey Jr, Eliot Spitzer, Woody Allen, Michael Vick — rise from the ashes to find redemption.

Now is his moment. What the Nigerian government has failed to do, Donald Sterling has the resources to do right. The U.S. government did it a few years back, when they sent the Navy Seals to eliminate Osama Bin Laden. This could be Donald Sterling’s comeback opportunity, and if his media advisors haven’t pointed this out already, I will.

I don’t need him to believe that these girls actually deserve to live out their lives without being raped every night, or tortured, for the crime of wanting to read. Let him suppose, if he does, that their presence in the stands at a Clippers game might give people the wrong impression. None of that matters, if he ponies up the cash to bring them home to their mothers. We’ll forgive him. Barbara Walters will choose him as her final interview subject. He will get a book contract (not that he needs the money, but his coffers may be depleted somewhat by this.) Lupita Nyong’o will play the main girl in the movie. Tommy Lee Jones will play Sterling, obviously. Kim Kardashian will be his girlfriend, the one with the recording device in her phone.

It is the most beautifully appropriate and ironic act for a fallen racist man, to liberate 234 African girls who have never heard of him, but for whom he would be a hero.

Joyce Maynard is the author of the novel To Die For 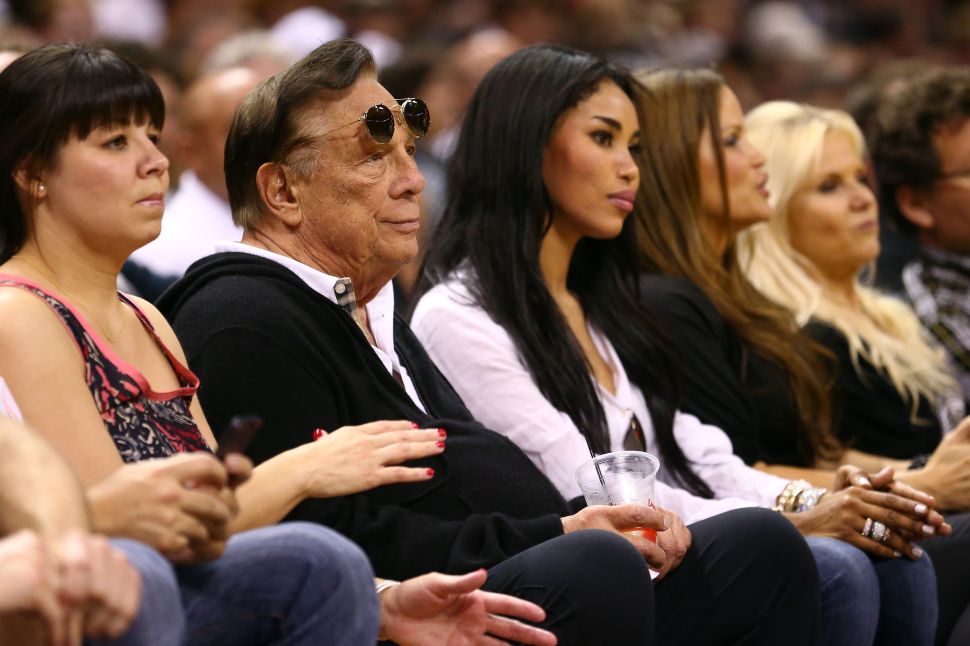