As the clock struck noon in New York, a crowd began to gather around Flatiron Plaza. The air was chilly and the sun covered by clouds, but that didn’t stop a rash of 20-somethings wearing Ray-Bans, reporters and confused onlookers from lining up to receive free, five-foot-tall plastic cactuses. Somewhere in the distance, a lone frat bro let out a howl: “Dos de Mayo, bitches!”

They were all waiting for one man. But what mere mortal could be important enough to skip work and bear the cold? Why, The Most Interesting Man in the World, of course.

The Dos Equis spokesman, whose real name is Jonathan Goldsmith, was set to appear in our fair city to kick off “Dos de Mayo.” Since Cinco de Mayo falls on a Monday this year, and since Mondays are the ultimate bummer, the Mexican beer company decided to move the holiday forward a few days. Conveniently, “May Dos,” as Mr. Interesting called it, falls on a Friday.

“I have petitioned the World Bank, and governments, and kings and queens to make Cinco de Mayo a holiday,” he told the crowd, after climbing out of a jet-black Camaro with his “maids,” two models named Mara and Keesh. So far his lobbying campaign has been unsuccessful, though, and Dos Equis had no choice but to kick off the holiday early.

“We are offering everyone a proper way to start this incredible fiesta,” he continued, as the Dos Equis theme song blasted in an endless loop. “And so it begins today in Nueva York… excuse me, New York.” After a rousing declaration of “stay thirsty, my friends,” Mr. Interesting excused himself, so he could “perform an emergency prostatectomy on an African porcupine” at the Bronx Zoo. The crowd cheered.

Meanwhile, Dos Equis employees checked IDs; if passerby wanted to take home one of 100 free plastic cactuses (adorned with colorful Dos Equis scarves) sprawled around the plaza, they had to take a selfie next to the Dos Equis logo and upload it to Instagram. The company didn’t want to unintentionally promote underage drinking.

“I plan on bringing this cactus to my 21st birthday party,” said New Jerseyan Dennis Zuro, who used a fake ID. “For the holiday, I think I’ll find the warmest place possible and chill out with some Coronas. Dos Equis doesn’t really scream Cinco de Mayo to me.”

Other popular locations for the giant plastic plant included the office, a friend’s front yard (classic Jersey), next to a Christmas tree, “I have no idea where to put this” and “I just wanted the scarf.”

New Yorkers’ motivations for celebrating Cinco de Mayo were as inspired as their cacti plans. “It’s a holiday, it’s Mexican Independence Day,” said a 67-year-old Upper West Sider who refused to give her name to the Observer, even though she had just Instagrammed a photo of herself at the event. It’s not Mexican Independence Day, but the holiday was dear to her heart anyway, because she “lived in Texas for seven years.”

The holiday was a throwback for members of Generation X as well. “It reminds me of college,” said Bushwick resident Ryan Ellis, 33. “The Dos Equis man is iconic, so it brings back memories.”

The Most Interesting Man campaign began in 2006, and Mr. Ellis would presumably have earned his undergraduate degree by then, so it’s not clear how Mr. Goldsmith’s character managed to become his college icon. Then again, we’re talking about a man who’s reputation is expanding faster than the universe. So you never know what he’s up to. 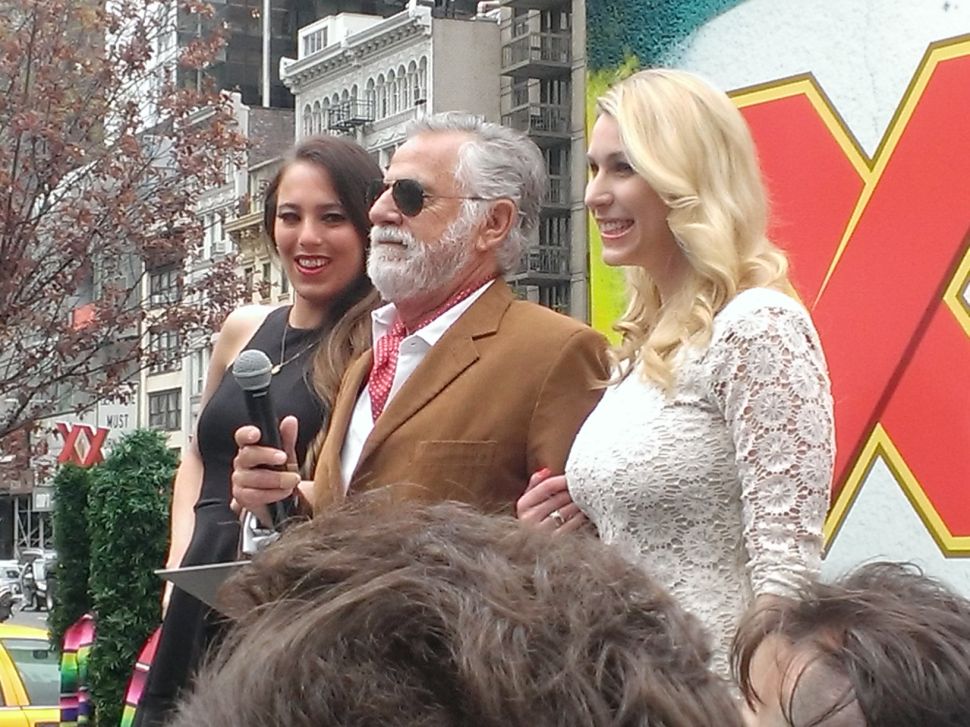