Filmed in eight nights for less than $2 million, with only one man behind the wheel of an automobile doing all of the acting, Locke has the passive elements of a radio show in the dark. It redefines economical filmmaking, but surprisingly, turns out to be more gripping than most action dramas. This is largely due to a calm but stressed performance by British hunk Tom Hardy, who usually appears as a punching bag in violent melodramas like Warrior and sci-fi epics like Inception. This time, he acts.

In Locke, he plays a responsible husband and father of two sons who makes a living supervising the pouring of concrete foundations for major construction sites. This is the night when he is forced to make a noble decision that tears his orderly, reliable life apart. Ivan Locke is racing toward London in his BMW on urgent business. A deal must be closed before his firm loses its biggest account. But there’s another reason for his panic. A lonely, pregnant, middle-aged woman he met on a one-night stand has gone unexpectedly into premature labor and needs him to be with her in the maternity ward.

Knowing his decision to do the moral thing will cost his business $100 million and the call he must make to his wife might wreck his marriage of 15 years, he battles time and traffic on the M6, trying to sort out his problems with a string of angry people on the other end of his car phone, the intensity of his emotions acted out behind the steering wheel while the camera photographs him in close-up and profile and outside the windshield, reflecting the action of truck convoys, headlights and highway signs in the side and rearview mirrors.

Writer-director Stephen Knight gets more suspense out of the restricted nature of Locke’s predicament than you would ever think possible. Juggling his assistant’s drunken inexperience with his wife’s disillusionment while confessing to his boss that he will not be present the next morning for the biggest “concrete pour” in England, Locke stands up for his principles and faces personal disaster at the same time, forcing Tom Hardy to display more emotional depth than he’s ever shown before.

Heading toward his destination as a decent man facing ruin by doing the right thing, Mr. Hardy does a great job acting out the phases of anxiety—frustration, confusion, exasperation and ultimate resolve—while working overtime to save a movie that takes place entirely on a cell phone from getting boring. He doesn’t always succeed, but there is nothing passive about his performance. He stays the course without detour. Color him galvanizing. 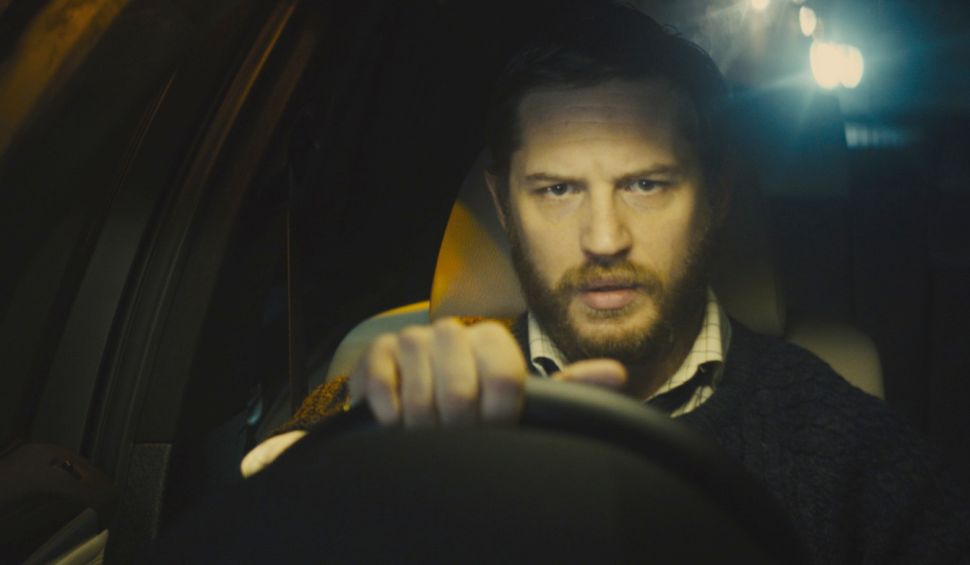