PATERSON – On the eastern end of Market Street stands a restaurant amid the clinging remnants of industry and a city’s trampled history, where inside under chandeliers in front of a crowd of 100 people, seven candidates for mayor made the case for why he or she can best revive the state’s third largest city.

Cliques and preferred rivalries have developed along this jagged campaign trail, leaving the two women in the contest to share the conclusion that men have fairly uniformly contributed to the city’s ruin.

“I like her,” Maria Teresa Feliciano said following the concluding remarks of her fellow competitor, Health and Human Services Director Donna Nelson Ivy, who threw up an arm in solidarity.

Cleaving to his message that the last 12 years have been a disaster, Council President Andre Sayegh attempted to simultaneously detonate both incumbent Mayor Jeff Jones and former Mayor  Jose “Joey” Torres.

“We don’t punch a clock. We work around the clock,” said Sayegh, slashing at an unnamed target on the dais otherwise known as the incumbent mayor who signed off on – but didn’t ultimately receive – overtime pay when Hurricane Irene overturned this city of 150,000 people.

The council president pivoted and zapped Torres, seated on the other side of the pushed-together tables at the front of the room here at the Bonfire.

“Receiving $74,000 in severance pay is entirely inappropriate and unjustifiable,” Sayegh announced. “No elected official is entitled to sick or vacation time. You don’t put out your hand and beg, you raise your hand and say ‘Thank God I was healthy.’ There’s no reason for anyone to collect money on the way out the door or for overtime.”

That was a direct hit on a glum but ultimately game Torres, who in his opening remarks had expressed the hope that the forum serve as a catalyst to discuss “the real issues,” who reiterated his argument that the city has an ordinance that legally enabled him – an employee of the city going back to 1985 when he left office following his 2010 loss – to collect severance pay.

“Currently right now it is the law that anyone who works is entitled to get paid for their sick and their vacation time,” Torres offered.

Only At-Large Councilman Rigo Rodriguez did not participate in tonight’s forum, the only absence in the eight-person mayoral field.

In the last debate, the mayor couldn’t utter a syllable without Gilmore, a former housing assistance director for the City of Waterbury, Connecticut, going on offense.

At this forum tonight sponsored by the oldest and largest of the city’s neighborhood associations, the East Side, moderated by President Mike Symonds, Jones enjoyed the luck of being assigned a speaking slot directly after Gilmore, which gave the mayor a prime spot to torment his tormentor.

Gilmore assumed the role again of the field’s most animated attack dog when it comes to Jones, jabbing the mayor for putting fraternity brothers in positions of power and for failing to fire incompetent department heads.

Jones happily took hold of the microphone after each salvo.

“What you just heard is so far from the truth,” he said in response to a Gilmore answer about the Municipal Utilities Authority, or, “Hiring people because they were fraternity brothers was never part of the consideration.”

Bounced out of office in 2012, former Ward 2 Councilman Aslon Goow appeared at the forum 20 pounds lighter after getting sidelined from the race with a virus. Someone pointed out to him as he approached the dais in advance of the debate that he was down to his fighting weight and Goow grinned back.

He had the advantage all night of speaking first.

He also bemoaned the parameters of the contest itself as he gestured to the crowd of seven other people crammed at the head table.  “We needed a runoff election,” he said. “That’s not fair the way we have it now with no run-off. We want the most qualified people in office.”

As it exists, the top vote-getter wins, sending visible shudders through the crowd of combatants, some of them convinced that other options would further embed the city in crisis.

A private investigator, Goow wants to fight crime in a city that laid-off 125 police officers to cope with a deficit and lost another 50 to retirement, and serve as a visible and accountable City Hall presence. Addressing a 40% tax hike in four years, Goow said he couldn’t cut taxes as mayor but promised if elected to stabilize the city’s finances.

Invariably Jones ended up with the microphone explaining the context of the city’s financial agony.

“Paterson has been broken for a very long time,” said the incumbent. “Four years cannot fix the depth of all the challenges. …You do the best you can with the little you have. I took office with a $70 million budget deficit and a state that believes in voter suppression. The realities will not change. I’m here because I live here.”

“We’ve seen behavior that people come to see as normal,” said the former county administrator. “I still believe character and integrity are qualities we want in our elected officials. It’s concerning to me that when you hear something repeatedly, you can become callous and accept it as normal.”

Peppered by Sayegh and Feliciano and somewhat shielded by a sympathetic Gilmore, Torres repeatedly tried to position himself as the only candidate with a sustained record of accomplishment, referring to his efforts over the course of eight years (2002-2010) to shift Paterson’s ratable base from residential to business with the opening of Centercity, Loews and Home Depot.

Nelson Ivy made her case as the head of the only arguably well run operation in city government.

“I know what we can be,” said the single mother of a grown son. “During the last four years, the Department of Health and Human Services has been the best run department in the city. I am a citizen. I love Paterson. My husband passed away when my son was 12 years old, and today he is a mechanical engineer. I got him through college and now I am the grandmother of a girl who looks like me.”

There were some feminine power shrieks in the crowd.

“When I started any of my jobs I have to leave things better than how I found them,” said Nelson Ivy, who all night long brought a vigorous presentation.

Ever combative, Gilmore griped about Sayegh and Jones both enjoying what Gilmore identified as fixes by the Democratic Party and some African-American clergy members respectively, lingering on Sayegh.

“The Democratic Party is anointing Andre Sayegh as their choice in a nonpartisan town,” the challenger announced.

“This is a diabolical scheme,” he added.

Dinged behind his back for not acting tough enough, raised by a single mother and armed now with an undergrad degree with honors from Seton Hall and a Master’s in public administration from Columbia, Sayegh reminded people that he shut down violent crime magnet Charlie Angels, a local club, on his way to improving quality of life in his home 6th Ward.

The candidates fielded a final question before their scheduled closing statements: a broad one asking them why they want to be mayor, which elicited groans from a crowd seeking a juicier finale.

Symonds gently tried to make the case that the question provided the perfect set up for the end of the night, but Goow protested, demanding more time for his closer, and receiving no argument from his rivals, who each answered the final question about their ambitions, then rose in accord with the rules, and made a final closing case. With less than a month to go before May 13th Election Day, the candidates and their entourages merged at the front doors of the Bonfire and spilled into the parking lot and the night of Paterson. 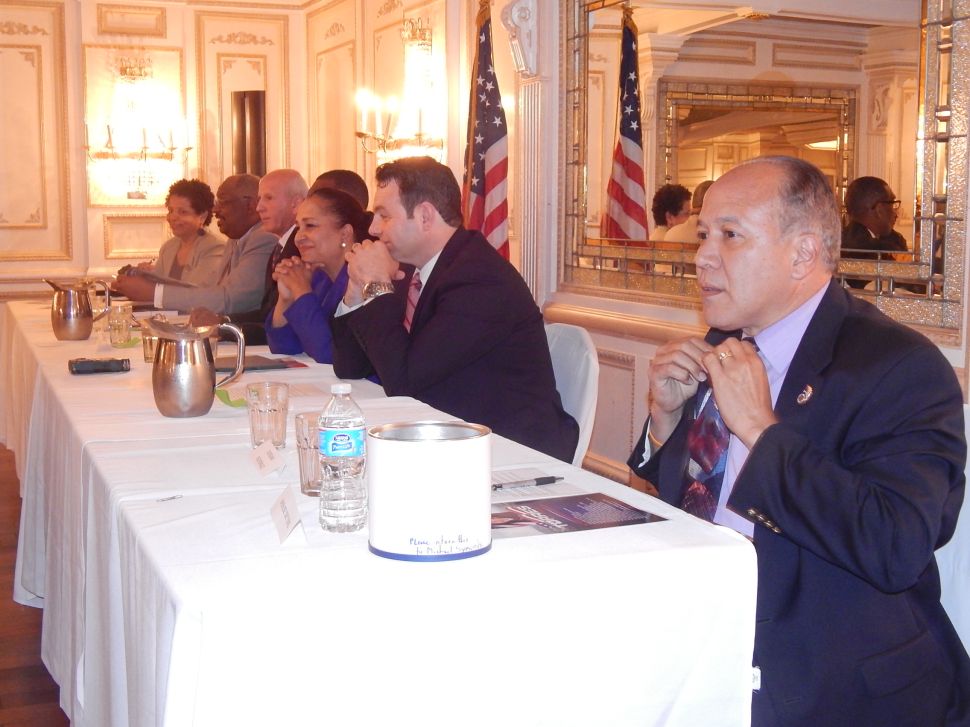