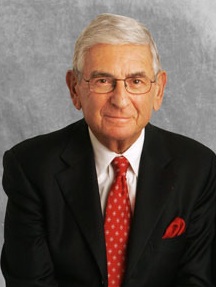 In a surprisingly candid interview with Los Angeles Magazine, billionaire philanthropist and Los Angeles cheerleader Eli Broad has this to say about Jeffrey Deitch, the former director of the Los Angeles Museum of Contemporary Art, where Mr. Broad is a lifetime trustee:

“Look, before, at MOCA, we had a director who couldn’t control the chief curator [Paul Schimmel]. We took a chance on Jeffrey Deitch. He’s a populist. He did several great shows, like Art in the Streets. He created MOCAtv. But he didn’t have the stomach, frankly, to deal with trustees or raise money or do other things. He was not a manager.”

Mr. Broad also admits that he voted for L.A.’s current mayor, Eric Garcetti, and that he’s hoping to purchase the Los Angeles Times, but the paper’s parent company is “making that difficult.” He also says he hopes the Broad Foundation will no longer exist 10 years after he and his wife are dead, stating, simply, “We want to finish all our work within ten years after our demise.” Asked if he ever thinks he has too much influence on Los Angeles, Mr. Broad responds with another “no.”