Last week on Faking It, Karma and to a lesser extent Amy realized that the path to popularity at their Austin high school was through being a fake lesbian couple. Because in MTV-landia (or at least fake Austin-landia) we’ve evolved past bigotry to the point that same sex couple hood is to be lauded and, at the very least, named Prom Queens. Kids these days.
Amy and Karma proved their gay mettle (which also sounds like a new favorite musical genre) by swapping spit on the main stage of the prom assembly. So how will Amy and Karma keep up the Grand Charade this week? Let’s find out. The camera zooms in on Karma —who has been leveraging her new-found lesbian status to capture the douchebag boy of her dreams — making out with said douchebag boy …in her dreams! Really, when are shows king to stop starting like this? When her alarm goes off, she rolls over and sees that she is asleep in bed with Amy. As it turns out, Amy is, of course, in the middle of her own sex dream that has her making out with Karma. Her alarm goes off, too and she awakens under the evil eye of her evil step-sister, Lauren, who announces that she plans to blackmail Amy — her silence about being a “vag-itarian” in exchange for Amy’s bigger bedroom.

Amy is still rubbing the sleep from her eyes when she is ordered to the breakfast table for blended family breakfast filled with bigoted bon mots. To wit: “We lost to a pair of lesbians!” “No need to call them names, dear.” “Marriage is one thing, but homecoming? When does it stop?” bemoans Amy’s mother. What hath ChristianMingle.com wrought?  After realizing that Lauren is going to out her to her parents if she doesn’t bend to her blackmail, Amy begs Karma to let them quit. Karma — who is either completely narcissistic or, you know, just a teenager — refuses. She bowls Amy over with her exuberance about the plan explaining that she scrapbooked together a puffy-painted dossier of their fake love and wants to milk their fake relationship status for all its worth. Amy agrees. The only way this makes any kind of sense is that she is actually in love with Karma.

Karma can’t totally understand Amy’s fear of being outed, though. She already came fake-out to her parents who toast the new couple with celebratory chai, laminated their PFLAG membership cards, and offer Amy a safe space to stay if her “unevolved” mother kicks her out of the house. Amy just smiles and nods. Over at the high school, Shane, the reigning queen is manning the homecoming ticket sales. He has dubbed the event “Homecoming Out” and all same sex dates get in for free while all hetero couples have to pay with the proceeds from the ticket sales going to a LGBTQ youth hotline. It’s funny because it’s so close to true. Obviously evil step-sister Lauren isn’t thrilled about the hetero-tax and stomps away from the table causing Shane to giggle, “She’s so two dimensional, it’s like she’s a character in Glee.” Zing! (On the one Fox writer who is watching the show!) Amy and Karma hit campus under a rain of applause and Karma soaks it all in before absconding to the art room to make out with Liam, who flirts with her by assuring her she is the “Portia” and not the Ellen in the relationship. She tells him that she and Amy have an open relationship with a personal don’t ask don’t tell policy. Karma tells Liam — the creep who has sleeping with a  lesbian on his vision board —  that she always thought she was “100% lesbonic” until she met him. That’s music to his ears, and they start making out. Back at Amy’s house, Lauren is blackmailing her for $50, the price of the prom ticket. Amy can’t deal, though, because she his also having to cope with Karma telling her that she is on the brink of having actual s-e-x with Liam in the always-romantic art studio. Who wouldn’t want their first time to be on a graffiti-addled paint-splattered table with the hint of paint thinner wafting through the air and the threat of someone walking in on them at any moment. Related: Who has sex in their high school? Amy thought  that Karma wanted the first time to be special. “It doesn’t get more special than the hottest guy at school,”  notes Karma in the perfect, irrefutable logic of a teenage girl. In a fit of …something (homo-panic? wishful hetero-thinking?) Amy tells her mom that she has a date with a boy for prom and her mom is so thrilled that she goes to call her nana. Amy then forces Shane to be her fake prom date, urging him to “butch it up a but to make it believable” for her former beauty queen Republican mother. It works like a charm, even though Shane shows up dressed like an extra in Magic Mike complete with sleeveless cowboy shirt and giant Stetson.

Just when it seems like Amy is going to be able to pull it off, and both fake out her mom and make Karma happy by being crowned the school’s first same sex prom queens, Amy’s mom gets a phone call. The good news is that the local news will be covering the dance. The bad news is that the local news affiliate is sending Amy’s mom on her first actual reporting assignment. Amy looks like she swallowed a tack. At the dance, Karma is already wearing her tiara and waiting for Amy to arrive when she gets a text from Liam suggesting they have sex in his “dance adjacent” car. Amy can’t talk her through the crisis, though, because she is busy taking the air out of the tires of the wrong news van. Amy launches into non-family friendly tirade as she watches her mom head to the high school. Meanwhile, in the back of Liam’s car, Karma finally realizes he’s a tool. She bolts out of the back seat when he admits that he wants to have sex with a lesbian, not Karma, specifically. She un-rumples her dress and tiara and hits prom, stumbling directly into Amy’s mother who shoves a microphone into her face. When Amy arrives on the scene, her mom tells her that she is cool with Karma being gay, because it really wasn’t her fault.

Karma’s parents are “so permissive” after all, but she would hate it if her own daughter was gay. Amy blanches at that and when Lauren throws her a life line (albeit one that would let her keep her blackmail material intact) by telling her mom that the lesbian prom queens already went home, Amy refuses to take it. Instead she grabs the crown and gets on camera and comes out as the other lesbian prom queen. Her mom doesn’t take it well, ruining her first shot at reporting by squirreling in front of the camera and only managing to squeak, “Back to you in the studio!”

The dance goes on, and the teenagers show Amy’s former beauty queen Republican mom what modern equality looks like. As Liam slow dances with his prom date Shane, he tells him that he’s sad about a secret girl and makes moonie eyes at Karma. Meanwhile, Karma confesses to Amy that she does want her first time to be special and that’s why she is going to make Liam fall in love with her. This just isn’t going to end well for Amy, is it? 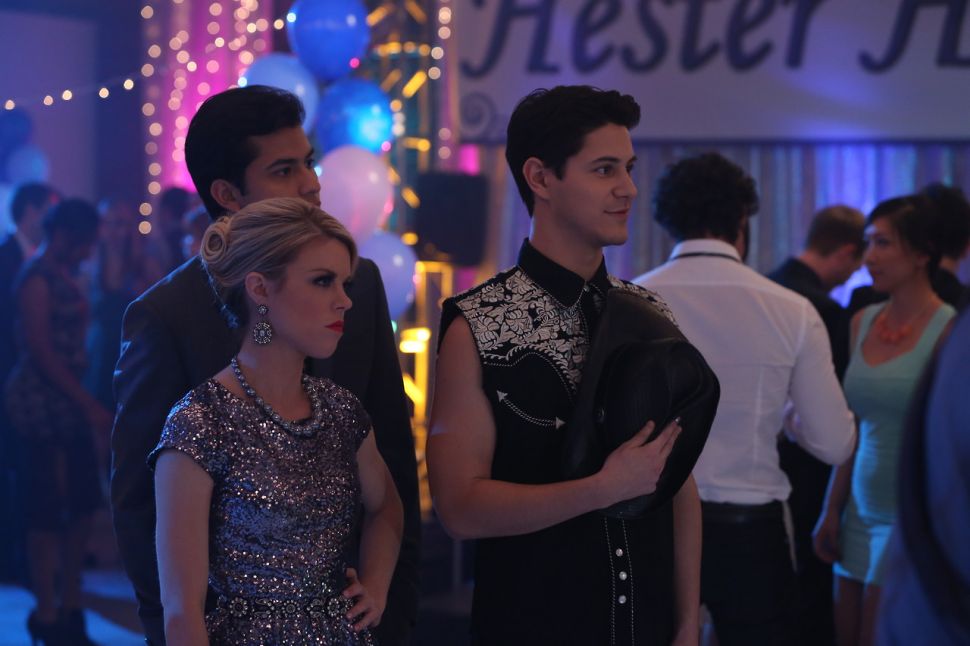