The Republican Party continues its search for a presidential candidate who can attract more public support than former Secretary of State Hillary Clinton. The most recent national survey from Fairleigh Dickinson University’s PublicMind finds Clinton is favored over a variety of possible Republican contenders in hypothetical head-to-head matchups among registered voters. The closest anyone comes to Clinton is Minnesota Congressman and former Vice Presidential nominee Paul Ryan with 46% favoring Clinton to 38% for Ryan. However, once the margin of error is accounted for, all look virtually the same against Clinton if the election were to be held today.

“Although it’s early, the invisible primary has already begun with possible candidates courting influential supporters and donors. Early numbers offer some insight into who is likely to score big as the clock ticks down to filling the upcoming vacancy at 1600 Pennsylvania Avenue,” said Krista Jenkins, director of PublicMind and professor of political science.

These numbers tell a story for both Republicans and Democrats. The stability in support for Hillary Clinton suggests that the variety of Republicans who are signaling, to varying degrees, some interest in running for the presidency are evaluated the same.

“Christie, Paul, Ryan, Bush and Huckabee are not one and the same, and yet they all seem to do about the same among registered voters when paired against Hillary Clinton. No one’s record is impenetrable, but these findings point to the strong position Clinton would find herself in should she officially become a nominee for the Democratic primary,” said Jenkins.

As for the Republicans, the fact that the field remains wide open could be good news for the potential individual candidates. There’s plenty of time for each to define himself to voters without the baggage of being a candidate with little support relative to his colleagues.

The same poll also finds that Republicans are struggling with women voters. Across the board, Hillary Clinton does better among women voters, with a gender gap in the double digits for all of the potential Republican candidates.

“Historically, no one does well when they lag in support among women voters by the degree that’s observed here. Whatever message is being communicated to voters from the party or potential candidates, it looks like many women aren’t buying it. Whether Hillary Clinton’s message, persona, gender, or some combination is behind greater female support, these numbers only strengthen her current profile,” said Jenkins.

Although riding high a few months ago, allegations in his home state of political corruption have complicated the prospective candidacy of New Jersey Governor Chris Christie. News of the media- dubbed “Bridgegate” affair have been followed closely by New Jersey voters (See March 2014 PublicMind), but it remains an open question as to whether the scandal is resonating, if at all, with a national electorate? The current poll finds registered voters nationwide are paying decidedly less attention to Bridgegate than what the FDU poll has found in its statewide surveys of New Jersey voters. Nationally, around a fifth (18%) say they are paying very close attention to the story, with an additional quarter (28%) who are following the story somewhat closely. The majority – 54 percent – aren’t following the story closely at all.

As for whether Governor Christie’s claims of ignorance about his aides’ behavior in closing lanes on the George Washington Bridge for political reasons are perceived truthfully by those who are following the story, around a third (37%) nationwide give him the benefit of the doubt, with the majority (57%) who believe it’s unlikely that he knew nothing.

“One of the defining traits of Christie has been his honesty and the perception that his leadership rises above the partisan fray. Bridgegate has called these beliefs into question in his home state. It’s possible that without the governor’s troubles of late, the head to head numbers with Clinton would look different and Christie would be in a stronger position. He’s faced with voters nationally who are following the story, including Republicans who say they find his innocence very or somewhat unlikely. Bridgegate has removed Christie from the fast lane of presidential campaigning. Instead of being ahead, Christie is bumper to bumper with the Republican pack,” said Jenkins.

The Fairleigh Dickinson University poll of 1051 registered voters was conducted by telephone with both landline and cell phones from April 21 through April 27, 2014 and has a margin of error of +/- three percentage points. 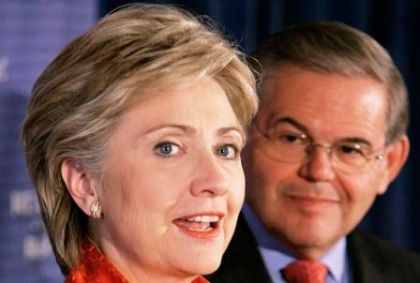