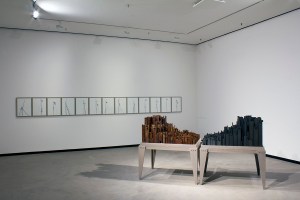 Installation view of ‘The Island of Atlas’ 2013 at Galleria Heino

Finland has announced that artist duo IC-98 will represent the country at pavilion in the 2015 Venice Biennale. The group, started in 1998 and originally called ‘Iconoclast,’ was selected by curator Taru Elfving, and includes Visa Suonpää and Patrik Söderlund.

Frame Visual Art Finland says the pair’s projects “often take the form of installations or publications, combining research, drawing and animation,” and investigate “the body politic, social formations and architectural constructions, heresies and pure systems of thought, and the presence of history in everyday life.” Their project for the biennale will be a new and site-specific work, Mr. Elfving said in a statement released to press.

IC-98 have shown in group exhibitions in New York including “Art on the Edge” at Vered Contemporary in 2012, and “Silent Watch” at the IPCNY International Print Center in 2011. They also participated in last year’s Volta NY fair with Galleria Heino, which represents them in Finland.