PATERSON – At a mayoral forum this morning in this fast-intensifying contest with three weeks to go until Election Day, former Mayor Jose “Joey” Torres and At-Large Councilman Rigo Rodriguez collided for the first time.

In self-protection mode, Torres called out by name his tormentors who signed off on his controversial $74,000 severance package four years ago only to resurface now as chastising 2014 mayoral combatants.

Rodriguez objected, telling the former mayor that he was wrong, and noting that Torres’ severance pay he received for review as a councilman was hidden amid other city payments.

Torres lashed out with a reference to Rodriguez’s indictment for ballot fraud in the 2010 election.

“It was camouflaged like a vote-by-mail,” the former mayor said.

“This is not about someone who couldn’t be found because he was on the golf course,” Gilmore zapped.

At another point, the challenger gripped Jones’ shoulder and said, “All we’ve heard are intentions, with no deliverables. I didn’t come here to [criticize] this guy. He’s a nice guy. But he has not delivered.”

Gilmore stumbled at the outset when he greeted “the City of Waterbury,” where he once worked.

Jones let the gaffe speak for itself as he stayed focused on parrying Torres and Council President Andre Sayegh, who sat side by side at the other end of the long table facing the packed room.

When Jones tried to take credit for the Great Falls Historic Park, Torres said, “The birth of the Great Falls started with Councilman [Tom] Rooney and I… it didn’t happen by accident.”

Torres later threw an oratorical elbow at Sayegh, accusing him of pay-to-play by voting for items tied to his financial backers. Sayegh said he sponsored the pay-to-play ordinance and abided by it.

The mayor was later scuffed up too with references to his administration’s affirmation of Hurricane Irene overtime pay.

“The mayor’s part of that problem,” Gilmore said.

Not all of the eight candidates participated in the forum. Former Councilman Aslon Goow and retired administrator Maria Teresa Feliciano were absent.

Amid another surge of disagreement, Rodriguez rose and said, “The biggest problem here is we don’t get along.” 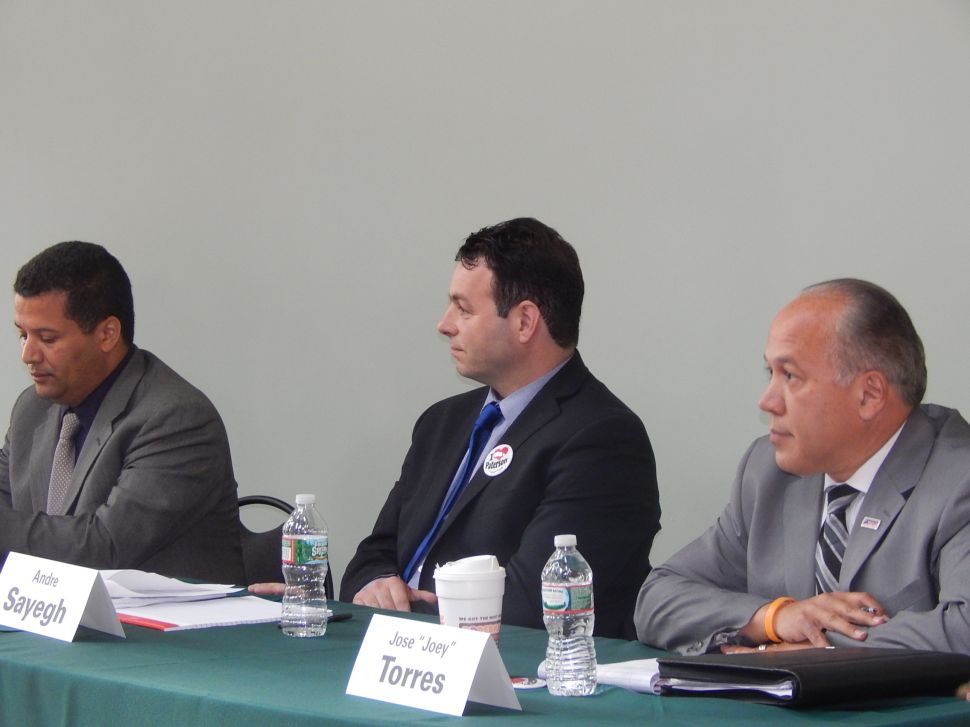