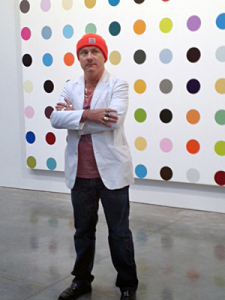 A Florida pastor was convicted on Tuesday of trying to sell five fake Damien Hirst paintings to an undercover police officer. According to The New York Times, the pastor, named Kevin Sutherland, also “dabbled in art dealing.” He was found guilty of second degree attempted grand larceny and faces up to seven years in prison at his sentencing on May 19.

More details from The Times:

“The case against Mr. Sutherland grew out of a larger investigation by the Manhattan district attorney’s office of a forger in Laguna Beach, Calif., who has admitted to churning out dozens of counterfeit Damien Hirst works and selling them on eBay to buyers around the world, also providing phony documents saying the works were genuine.

The forger, Vincent Lopreto, was arrested on a New York warrant in October 2013 along with his gallery partner, Ronald Bell. In January, Mr. Lopreto, who had already served time in California for art fraud, pleaded guilty to identity theft and fraud and agreed to testify against Mr. Sutherland in return for a lighter sentence.”

The paintings were copies of Mr. Hirst’s spot and spin paintings, which are known to be made predominantly by the artist’s assistants. In 2011, the spot paintings went on view at every Gagosian Gallery location around the globe. According to researchers behind a catalogue raisonné of the spot paintings, there are exactly 1,365 of them extant.

Mr. Sutherland was a pastor at Mosaic Miami Church, according to The Times. The church’s website says they are “all about ‘Life Change’ helping you find your way from where you are, into who God has created you to be.” Whether the incident will appear in Mr. Hirst’s forthcoming autobiography, which, like the spot paintings, will be created by someone that isn’t Damien Hirst, remains to be seen.

Filed Under: Arts, f for fake