After recently learning that New York sleeps in later than every other city in the country, we’re wondering why the NYPD is trying so damn hard to get rid of subway break dancers.

Because what does a better job of waking New Yorkers up than dodging flailing legs on the L train at 9:00 a.m.? Oh yeah, we have Starbucks for that.

Despite the fact that some New Yorkers enjoy a little artistic expression with their subway rides, the NYPD sees these entertainers as a danger to us all.

There were only two such charges of reckless endangerment committed by subway dancers in 2013.

The crackdown is partially due to the fact that the MTA is now forwarding rider complaints to the NYPD, allowing law enforcement to shut down the subway shows as they occur.

But dancers aren’t the only underground dangers the NYPD is targeting, and no, we’re not talking about the rats or the crowds, or even the upskirt photography (although we wish we were).

Despite Mayor Bill de Blasio insisting there is no “crackdown” going on, the Post reported that police have busted 371 panhandlers so far this year — a hefty increase from the total 100 charged last year.

Police have locked up 122 peddlers in 2014, which is nearly twice as many as those jailed by this time last year.

At least underground muggings are down! 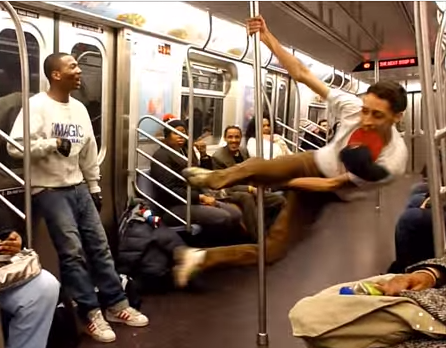