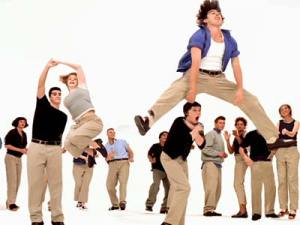 Young people celebrating the partnership of Frieze Art Fair and the Gap.

Frieze Art Fair, which–like the specter of death itself–always seems to creep up on you (it opens in New York next week), announced yesterday a partnership with noted khaki pants retailer Gap Inc. According to a press release:

“Gap has designed two unique outdoor experiences, called Gap White Space at Frieze, in collaboration with New York-based architects, Leong Leong, to welcome guests at the Frieze Art Fair locations in Randall’s Island, New York and Regent’s Park, London. These experiences are named after the White Space rooms found in select Gap flagship stores across the globe. These rooms feature and test the brand’s newest and most cutting edge items, allowing shoppers to experience Gap product in a unique and exciting environment.”

If an annual art fair that moves millions of dollars of luxury goods in a state-of-the-art white tent that occupies the same bit of land as New York’s premier psychiatric institution teaming up with an affordable apparel chain seems random to you, well, let’s just consider the facts.

Founded by Donald G. and Doris F. Fisher in 1969 in San Francisco, predominantly to sell Levi’s and records, the Gap has since grown into a global business with 1,600 franchises across the world. Over the years, the Fishers amassed a legendary art collection, which they eventually donated to the San Francisco Museum of Modern Art. (Gap Inc. has a new creative director, Rebekka Bay, who is hoping to revamp the company and make it appealing once more to consumers after several years of decline.) So there’s the art connection, but really, how different are the Gap and today’s art world anyway? Vaguely inoffensive objects that are sold out of a bland white cube? Check. A general hubris that has led to an international expansion that presents these respective objects as essential to a certain income group? Check. The corporatization of a creative field, certain aspects of which have been rendered almost entirely homogenous by too much money? Oh, you better believe that’s a check.

Gap White Space will include T-shirt designs by Alex Katz, Yoko Ono, Richard Phillips, Ugo Rondinone, Peter Lindbergh, Francois Berthoud and Roe Ethridge. Why not buy a Richard Phillips painting and get a Richard Phillips T-shirt all in one go? Frieze New York opens to the public on May 9. See you at the Gap, everyone!