PATERSON – Gearing up for a possible 2017 showdown for governor, Senate President Steve Sweeney (D-3) and Jersey City Mayor Steve Fulop both want to be loved by Passaic County Democratic Chairman John Currie, who also serves as chair of the Democratic State Committee.

So when it comes to winning one race, at least, the two men are united.

To that end, and to enhance their standing in the statewide political stratosphere, Fulop and Sweeney donated money to the Paterson mayoral campaign of Andre Sayegh, who has Currie’s and the County Democratic Party’s backing in the closely watched  May 13th mayoral election.

Sources close to Sayegh say the money is less about Currie and more about a chance for players beyond the borders of the Silk City to get the attention of a rising North Jersey party star.

As Fulop and Sweeney play a statewide chess match using candidates as opposing pieces in an effort to gain clout for a future head-to-head, the rivals’ support for the same candidate in Paterson represents a departure from Newark.

Fulop’s very vocally lined up on the other side of that fight with South Ward Councilman Ras Baraka.

In Passaic County now, “This is all about pleasing Currie,” a Democratic Party source told PolitickerNJ, referring to Fulop’s and Sweeney’s support for the party-backed Sayegh.

A source told PolitickerNJ that ELEC reports will show a $8,200 donation from Jersey City Democrats to the council president’s mayoral campaign. The source said Fulop raised about $30,000 for Sayegh at a fundraiser for the candidate. Sweeney contributed $7,200 to the Sayegh Campaign, according to another source. “But there are also independent expenditures that will go in with ties to people and labor backing – powerful people,” the source added.

Another party source, close to the campaign and speaking on condition of anonymity, said the support from Fulop and Sweeney indicated more interest in Sayegh and Paterson than Currie.

“Its less about John Currie and more about how Andre Sayegh has an opportunity to reach out to many leaders around the state,” the source said. “In the case of Sweeney and Fulop, the campaign is bringing state leadership to Paterson that is otherwise divided.”

Also, the pull of U.S. Rep. Bill Pascrell (D-9), whose son, Bill III is all in with Sayegh, should not be discounted, the source added.

“Andre’s campaign for mayor has received considerable support from people and organizations both inside and outside Paterson, including the Paterson Police PBA and the Operating Engineers Local 825,” Davies said. “The support from Senate President Sweeney and Mayor Fulop shows that leadership throughout the state are coming together to support Andre Sayegh because Paterson has suffered from a lack of leadership inside the Mayor’s Office for the past twelve years and Andre Sayegh has the vision required to lead Paterson forward.” 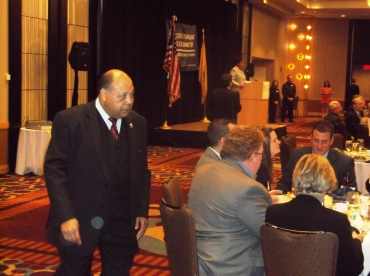