There are just six weeks left to see hot and gorgeous Queen of the Night, the spectacular Diamond Horseshoe floor show shaking New York City nightlife to its core. Style-setter extraordinaire Giovanna Battaglia, creative director of the show talks about her inspiration and Thom Browne’s beyond bajazzling costumes. When Giovanna Battaglia signed on as creative director of Queen of the Night – a fantastical, circus-like production by Randy Weiner, Simon Hammerstein and Murtaza Akbar – she already had a costume designer in mind. “I remember this one fashion show that Thom Browne did a few seasons ago, where he showed a long red dress in front of a black door – it was pure theater.” she recalled. A fashion editor admired for bold sartorial choices, Ms. Battaglia appreciated Mr. Browne’s elaborate and structured ready-to-wear and felt his aesthetic was perfect for the erotic revelry about to commence nightly at the Diamond Horseshoe. The pair collaborated on more than 80 costumes, ranging from cropped suits to sexy frocks, to one giant cape for the queen, a character loosely based on Italian heiress Marchesa Luise Casati. Ms. Battaglia discussed the collaboration with the Observer and explained why the experience has been so special:

Where did your fashion expertise fit into the process among so many creative personalities?

It was like making a big puzzle. Everybody was taking care of his or her part of the puzzle, but each section needed to fit with everything else. That was the trickiest part – everything had to make sense. There had to be an overarching sense of the aesthetic, of craziness, passion and obsession, everything I loved in one place, in fact. I worked with Thom on the costumes. We needed a fashion designer who wasn’t going to make another Broadway costume. We needed a melting pot of creativity. We needed a real New Yorker, a designer based in this city who had to be creative and ultra dreamy. And I went straight to Thom.

How was this experience different from anything you’ve done?

Everything I shoot is created with photographers, hairdressers and make up artists. Basically I did that in a way with Queen, but it was bigger. It lasts and it’s entertaining. I’ve done exhibitions, but never a circus performance or food performance with music. We were all pushed into unexplored territory. That was the most challenging thing and the most exciting. What’s an example of an aesthetic choice you made that didn’t work out?

I wanted to make this big sunburst on the ceiling, right above the oval stage. It was very Bernini-inspired, a baroque reference based on the San Pietro in Rome, like the floor of a cathedral. So we put this big, glorious sunburst up and the circus started rehearsal. Suddenly a crew member says, ‘The sunburst needs to go down.’ I asked why. ‘Because we’re going to accidentally kill one of the performers.’ So obviously we took it down but then it brought another great idea, we decided to use it to make the centerpieces instead. So we began constructing these centerpieces using the sunburst. It was a bad idea at the beginning that resulted in something great. It was newer and unplanned and ended up working out way better than original idea. Let’s talk costumes. Where did you find the inspiration for what you wanted created?

Thom said that he didn’t want to see any inspiration books, he just wanted to talk to me. For the queen, we channeled the spirit of Marchesa Casati. She’s equal parts artist, opera singer, actress, saint, mama. She’s empowered. So we made her this light blue cape, she looked like a female pope but more radiant. And then she goes from being the queen of the night to a real woman in a simple nude slip.

How did you lend your personal style to the costumes?

It’s my aesthetic of Fellini mixed with Baz Luhrmann’s costume opulence. That’s where I see myself. Thom said to me, ‘We are thinking about you every time we design a costume,’ which is the biggest compliment. I love to overdress when there’s an occasion to do it.

How would you describe the process in creating and editing and styling these garments?

We first had to take Thom’s sketches and ideas and make them into a reality. Thom would want to do a certain type of fabric or embroidery or shapes for the jackets but the performers needed to move. So we went to the Broadway costume atelier, which for me was like going to Willy Wonka’s factory. They do costumes for all the major Broadway shows. They helped us take Thom’s ideas and make them functional.

What would you say your favorite costume is?

Obviously the Queen of the Night. I would wear that blue cape everyday.

Queen of the Night 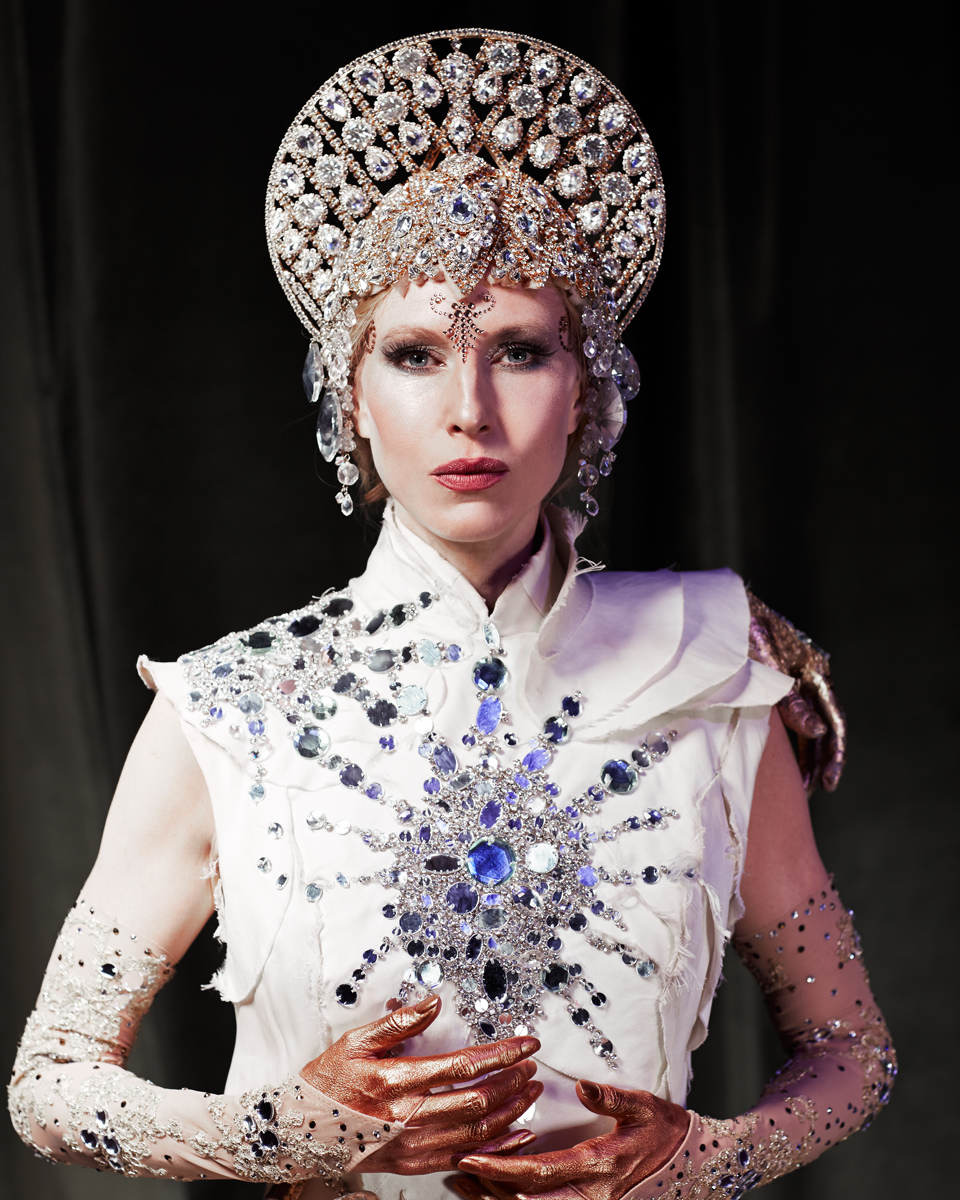