Though undeniably desirable, the outdoor pool is not a residential feature much associated with New York, where scant square footage makes the sacrifice of even a postage-stamp size plot inadvisable. But the agglomeration of money in our great city has increasingly ensured that the financial elite need not forgo even impractical desirables, like the comforts of an upscale suburb. Though the execution in Manhattan is quite unlike anything to be found in a quotidian commuter town: case in point, the insane, 61-foot-long pool that comes with the uppermost penthouse of Norman Foster-designed 551 West 21st Street.

Renderings obtained by the Observer show the top penthouse’s shimmery-aquamarine expanse overlooking the Hudson River with a vast, public-pool-sized deck (which is private of course). The unit comes with more than 4,000 square feet of outdoor space and a price tag of $50 million, which is a relative bargain considering that the city’s other penthouse with a private sky pool, at 50 UN Plaza, is asking $100 million. (The latter apartment is also of Norman Foster design.) And best of all, the West Chelsea building has been engineered not only to accommodate desirable waters, but to keep out unwanted ones, namely, those of the Hudson, with the planned building having undergone a storm-resistant redesign in the aftermath of Sandy. Among the building’s less noticeable bling are a 6-foot concrete wall around its base and mechanicals on the second floor rather than in the basement.

But now, on to the bling-ier bling. First and foremost, gold! The penthouses, like all other units in the buildings, will look out onto the world of West Chelsea from gold-framed windows, but the penthouse units, all 6,200-square-foot floor-throughs, will get 360-degree views of the city from theirs. That the windows should actually be framed, rather than of the limitless, glass-walled variety, is indicative of the fact that high-end condo design is increasingly moving away from the over-exposed open-floorplan layouts of the ‘aughts. A shift that developer Scott Resnick told the Observer also contributed to the Candela-inspired layouts of the apartments. (You won’t find any unsightly columns here.)

Other ridiculously high-end features in the three penthouses, which start at $35 million, include separate service entrances, double-sided wood-burning fireplaces and kitchens with not only Gaggenau barbeuce and Teppanyaki grills (because surely any chef’s kitchen is not fully equipped without a Japanese iron griddle?), but also cooling and heating drawers, which should not be confused with the two Sub-zero refrigerator/freezers, twin wine coolers, Miele microwave or Gaggenau cooktop. (And of course, one requires two Miele dishwashers to clean all the dishes generated by this abundance of cooking machinery.)

Naturally, you’ll also find all the trappings of other $20-million-and-up penthouses within: 12-foot ceilings , oak herringbone floors, free-standing tubs and many rare and refined cuts of stone and wood. And don’t forget the loggias.

The 19-story condo has 41 non-penthouse apartments, currently priced between $5.75 million and $17.5 million. Sales started on February 28 of this year; a spokesperson for the developer told the Observer that the building is nearing 50 percent sold. 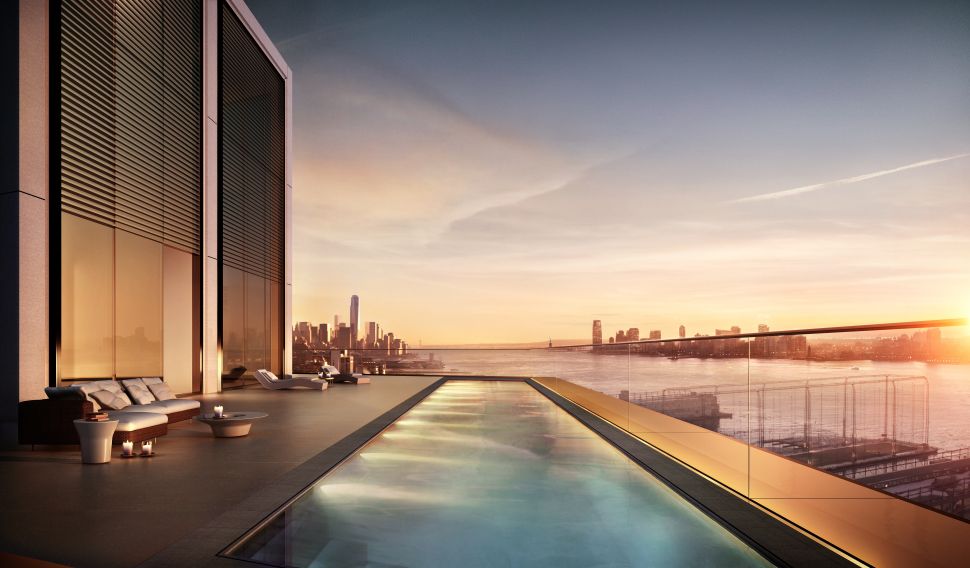