Barbara Standley went through the usual frustrations when she first moved from Phoenix to Greenpoint in 2011: fruitless weeks crawling Craigslist for an affordable apartment and months turned about by the neighborhood’s oddly intersecting streets. Fortunately, the 69-year-old wasn’t alone—the Brooklyn neighborhood best known for Girls and half a dozen just like it are undergoing an invasion of grandmothers.

Coveted neighborhoods from Greenpoint and Williamsburg to Carroll Gardens and Crown Heights are experiencing an influx of formerly suburban grandparents, a crop of graying gentrifiers who join some 380,000-odd elderly in New York’s most populous—and popular—county. It’s a trend that shows no sign of slowing, even as its harbingers do.

“I like people younger than myself, but I also have girlfriends my age, so I’m quite happy,” said Ms. Standley, who currently rents an apartment overlooking Greenpoint’s McGolrich Park, just blocks from her granddaughter, Juniper, 4, and her infant grandson, Jasper. “I thought I would never live here, that [New York City] was a horrible place. But here I am.”

Brokers say grandparent buyers have emerged as a small but significant force in some of Brooklyn’s most sought-after markets.

“I’ve done five deals with people who that have that profile, which is a lot, because I don’t think I ever had anybody like that before a couple of years ago,” said Corcoran broker Deborah Rieders. “I think the grandparents come, and they fall in love with the borough, and they see that they can have a more interesting life in Brooklyn than they would in Westchester.”

But while the move is almost always prompted by offspring already entrenched in the city, it’s more than just the tots that make Brooklyn appealing to its oldest new residents.

“We range in age: The youngest is in her late 50s or early 60s, and the oldest is 10 years older than me,” said Elizabeth Calderon, a lawyer and the head of the Park Slope Grandparents group, who moved from the Washington, D.C., area to Brooklyn when her grandson was born and provides the majority of his care while her daughter is at work. “I think everybody pretty much rents first and then realizes that they really want to be here.”

The phenomenon isn’t restricted to UPPAbaby enclaves, either.

“There’s a couple of buyers I’ve worked with in the past year that were aiming for Williamsburg, Bushwick and Greenpoint, specifically because they wanted to be part of the emerging art scene,” said Brooke Joslyn, a broker at Stribling and Associates, who noted an increase in the number of out-of-town grandparents seeking pied-à-terres and permanent residences in the borough. “They’re very aware of the assets of living in the city, and they want to be connected to the restaurants and the art scene and the community.”

Those buyers go for condos over co-ops and can often pay cash.

“Half of the people that I’m dealing with are straight-up cash buyers—they’re jettisoning their palatial four-bedroom compound, pulling all of their equity out of there and using a quarter of it,” Ms. Joslyn said. “People in Connecticut are selling a $4 million home with acreage that they raised their kids in, and they’re using a million of it in cash to buy a super comfortable glass box in the sky.”

But the tony trend also underscores a less glamorous financial reality. Brooklyn merchant Atim Oton had just opened Calabar Imports on Crown Heights’ rapidly gentrifying Franklin Avenue in 2012 when she began noticing what she thought were very old parents. What she discovered instead were otherwise prosperous families that had turned to Grandma and Grandpa out of economic desperation.

“What’s happened in a two-parent family is that they all have to work later—the babysitter cannot stay past 6 or 7 p.m., and the parent is doing meetings after that,” Ms. Oton said of her customers. “To pay somebody anywhere from $25,000 to $40,000 who cannot serve all your needs, it now basically means that the next possible resource is family.”

Rosemary Love knew she’d be making life easier for her son and daughter-in-law when she moved back to Brooklyn from Long Island three years ago. After renting for about 18 months, she recently bought a $375,000 condo in the Columbia Waterfront District, a  few short blocks from her 8-year-old granddaughter, Abby, whom she babysits several nights per week.

“It was important to be close to her, and not only her but my to son and my daughter-in-law, too”  Ms. Love said. “If I need to sleep over, it’s fine with me as long as I can get to work. They definitely have more freedom because I’m there.”

Her son, Ian Love, is a musician, and her daughter-in-law, Jennifer, is a high-level member of Heidi Klum’s staff. Both work long hours, go out late nights and are frequently abroad.

“We have a babysitter that comes three days a week. My daughter’s in school and my mom works, so she comes usually two to three nights a week,” Mr. Love said.

“Between my babysitter and my mom and friends of my daughter’s parents who are willing to let her stay, I’m very rarely stuck., If not for Abby and the close relationship her new condo affords, grandmother Love said she’d be homesteading in Woodstock or running an animal shelter instead of selling furniture at Crate & Barrel in Soho.

“I’m really a country person, and had it not been for my granddaughter, I’d probably have gotten a little house somewhere,” Ms. Love said. “When I come back [from visiting her sister in Florida] and I’m driving back from the airport through crappy parts of Brooklyn, I’m like, Why am I living here?”

Still, Grandma Love said her corner of the borough has been surprisingly idyllic, and she described her new life as a kind of brownstone Mayberry.

Five of my granddaughter’s friends live on my block. I’m always seeing them,” Ms. Love said. “They all call me Grandma; I’m like their grandma too, almost.”
Ms. Calderon went further, saying it’s not only the immediate families who benefit from grandparents like her moving into town.

“We’re in a sense having a three-generation family, which was already existing within the black community,” Ms. Oton said. “It’s actually re-engineering back to grandparents caring for kids. We’re getting more ironically equal in that sense.” 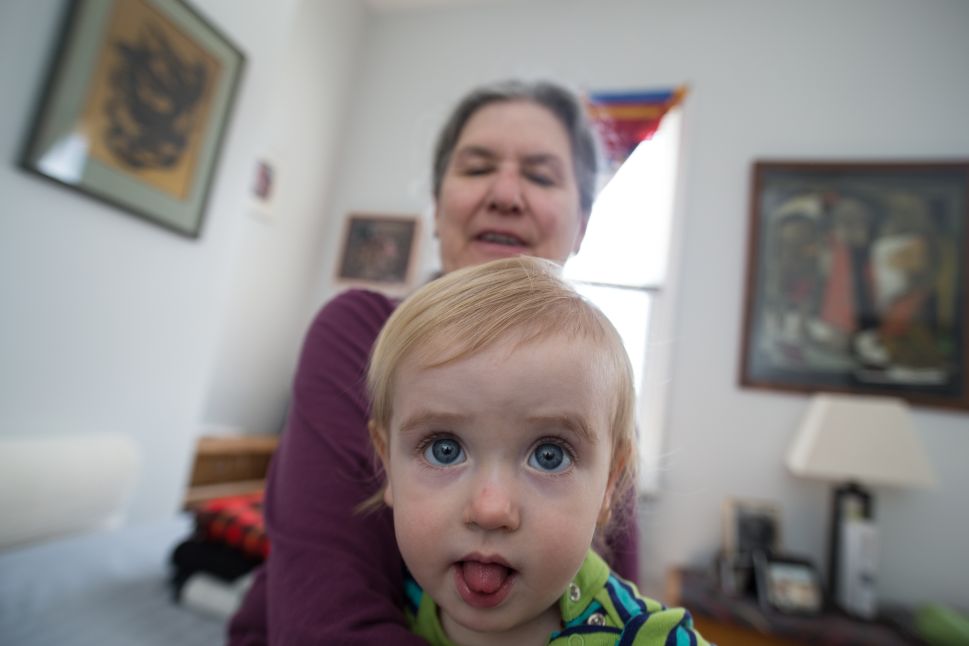