It’s all over but the votes. The final Broadway competitors for the Tony Awards have met the deadline and results of the final tally will be obvious at last on June 8. Meanwhile, two late-season openings that just made it under the wire were well worth waiting for. Years of experience in drag shows before he took the theater by storm as a writer taught Harvey Fierstein his way around a girdle, and in Casa Valentina, his first major play in decades, he shares the laughs, tears, dangers and rewards of cross-dressing in an illuminating work that is moving, hilarious and ultimately heartbreaking.

Casa Valentina is not a drag revue. It’s a serious, provocative play set in a real weekend resort in the Catskills during the 1960s that catered to a special clientele—heterosexual men, some married with children, who would arrive with their briefcases and business suits and change for dinner into their most expensive wigs, frilliest lingerie, highest heels and most fashionable silk and taffeta, ready to indulge their secret passion as transvestites. “Commoners drink to excess,” says one man wearing a chic cocktail dress. “I drink to access.” Bringing the glory and the contradictions of a whispered subculture to the stage with powerful impact, Mr. Fierstein introduces his seven disparate cross-dressers—businessmen, executives, career professionals, even a judge—all with their own individual girlie names and a curious mixture of pride and shame, guilt and innocence, caution and daring, pain and pleasure.

The innkeepers devoted to their guests’ every need are George (Patrick Page) and his understanding wife and soul mate Rita (played to perfection by the always startling, warm and consummate Mare Winningham). Rita is the only woman in the company of so many men, and she gives them the same tea and sympathy she reserves for her husband George (whose female name is Valentina)—combing out their wigs, ironing their brocades, in perfect harmony with their sincere comic belief that “being a man is the curse of the Y chromosome.” How she really feels, deep down inside, and how she regards her place in a marriage where she lives in competition with a part of her husband’s secret world to which she can never really feel totally equal, is investigated in a sublime, heartfelt speech near the end of the play. Mr. Fierstein’s writing of this “truth game” scene is so concise, so wise and so touching that you can only feel pain, wondering how the marriage will ever be the same.

Enter Charlotte (Reed Birney), a brilliant and dedicated writer, publisher and pioneer who flies in from California to convince the regulars at Casa Valentina to form a national “sorority” of transvestites devoted to turning transvestitism into an acceptable part of mainstream society. Mr. Birney, chain-smoking in a Chanel suit, with matching purse and shoes, flawless pearls and a June Allyson pageboy, gives the most staggeringly truthful performance in the play. I knew he was an accomplished and versatile actor, but who knew he had such great legs? Charlotte, who has been to jail for his beliefs, has brought petitions, but his militant passion is not shared by all. The judge, who tells his wife he’s going hunting and then shows up with a Winchester and a mouton coat, has worked his entire life for respectability buffered by anonymity, and feels privacy is nonnegotiable. The English professor Jonathon (Gabriel Ebert), on his debut visit to Casa Valentina, is feverishly excited in his first negligee as Miranda, but his male persona—preppy, square, in white sox and loafers—can’t risk the disgust his wife would feel if he made his secret public.

As the owner of the inn, Patrick Page in drag looks alarmingly like Joan Crawford in her black wig wielding an ax in Berserk, while John Cullum and Larry Pine, as senior citizens named Terry and Amy, resemble two dowager librarians chaperoning a senior prom. Bessie (Tom McGowan), a decorated war hero with three grown children who specializes in colorful turbans to hide his baldness, is not progressive enough to face the consequences. Their fear of blackmail or incarceration (it was a time when it was still illegal to walk around in lipstick and wedgies) disappoints Charlotte, who insists, “Anonymity is no longer mandatory.” In one of the play’s most shocking lines, Charlotte’s nasty personal prejudices surface when he vows to protect cross-dressers by excluding homosexuals from the national sorority’s membership rolls: “Fifty years from now, when homosexuals are still scuttling about as the back-alley vermin of society, cross-dressing will be as everyday as cigarette smoking.”

This is Harvey Fierstein waxing ironic, for nothing in the prediction ever came true. In retrospect, it’s the emancipated gays who outgrew the stigma, but when was the last time anybody saw a transvestite shopping at the Winn-Dixie? Mr. Fierstein tackles every point of view, eloquently explaining the psychology of cross-dressing, the luxury of dual personalities, and the need for compassion. The brilliant direction by Joe Mantello assembles a magnificent cast of uniformly perfect actors; the expert sets by Scott Pask depict a rural paradise where they can feel at home without challenge. It’s a play that might not inspire the masses (men in housecoats who don’t sing and dance and make fools of themselves and each other are not exactly a topic of top priority). It gets preachy and talky at times, and it takes on too many issues to make an audience feel comfortable. But its flurries of cracked poetry and logic have a way of sticking to the cerebellum, and at least while you are being entertained, it makes you think—about the elusive nature of American social history and sexual politics. If all you want is another drag show, go to Kinky Boots or the ghastly Hedwig and the Angry Inch. This one is really about something.

THE SCHNAPPS IS FLOWING AGAIN AT Cabaret. In the newest incarnation of John Kander and Fred Ebb’s classic musical, with book by Joe Masteroff, the ghosts of Nazi Berlin and the decadence of Studio 54 meet with explosive impact on solid, sordid ground. I mean, Studio 54 was nothing if not the Kit Kat Klub 30 years later, so I can’t imagine the sweat, stink and sleaze of a lurid prewar Germany staged in a more perfect setting. One word of warning: my back has been killing me ever since this controversial Sam Mendes revival moved from the proscenium stage to the nightclub atmosphere of a honky-tonk. Forced to perch for hours on tiny, metal, straight-back chairs in a torture designed to make chiropractors practice their wares with glee, I can’t say I’m ready to jog around the Central Park lake with any degree of mobility. These are the same chairs that Marlene Dietrich dug her stiletto heels into in The Blue Angel, but what might have been a perfect fit for Marlene is pure punishment for the human spine. With tables the size of smile buttons, and rip-off menu prices, this is a show that should turn Mayor De Blasio and the Better Business Bureau into drama critics. The show itself is almost worth a trip to the nearest Equinox gym. You don’t have Liza Minnelli singing the hell out of “When I go, I’m goin’ like Elsie…” in the movie version. But what you get is an enchanting Michelle Williams, more clueless and unfazed than any other Sally Bowles, who belts with the best in a voice smoky and full of vibrato in all the right places. A talented girl impersonating a self-deluded no-talent, she’s delectably on target. And you don’t get the legendary Lotte Lenya as the calloused landlady, Fraulein Schneider. When she sauntered onstage on opening night of the original Harold Prince production in her frayed German housecoat, dragging the entire sound and smell of the Weimar period onstage with her, she broke your heart and made history in the process. Linda Emond is neither Lenya, nor Polly Bergen, a battered triumph in the last Sam Mendes production I saw. But she’s a terrific actress with an astoundingly strong dramatic voice who turns “So What” and “What Would You Do?” into her own personal anthems of despair and survival.

You get Bill Heck as the first Clifford Bradshaw I have ever seen who made that thankless role (based on Christopher Isherwood, who wrote the original Berlin Stories) more memorable than just a narrator, an archivist or a camera. And best of all, you get the sinewy, lip-licking evil of Alan Cumming’s emcee, with lurid tattoos and rouged nipples, fully indicating the impending horror of approaching Nazi boots. He’s not as superficially cheery as Joel Grey and Raúl Esparza was sexier, but he has his own cunning allure.

Meanwhile, the girls have bruises, hickeys and needle marks, the men display hairy thighs protruding from garter belts, and everyone goose-steps through every conceivable simulated sexual S-and-M ritual in song and dance like Gestapos in drag. The pelvic thrusts and bouncing breasts in Rob Marshall’s choreography retain a lot of Bob Fosse’s originality and timing, and Sam Mendes has done a great job of building suspense within the parameters of a musical. His Cabaret is diverting, slick and exciting. So, “come this way, your table’s waiting…” Just don’t forget to bring your own pillow. 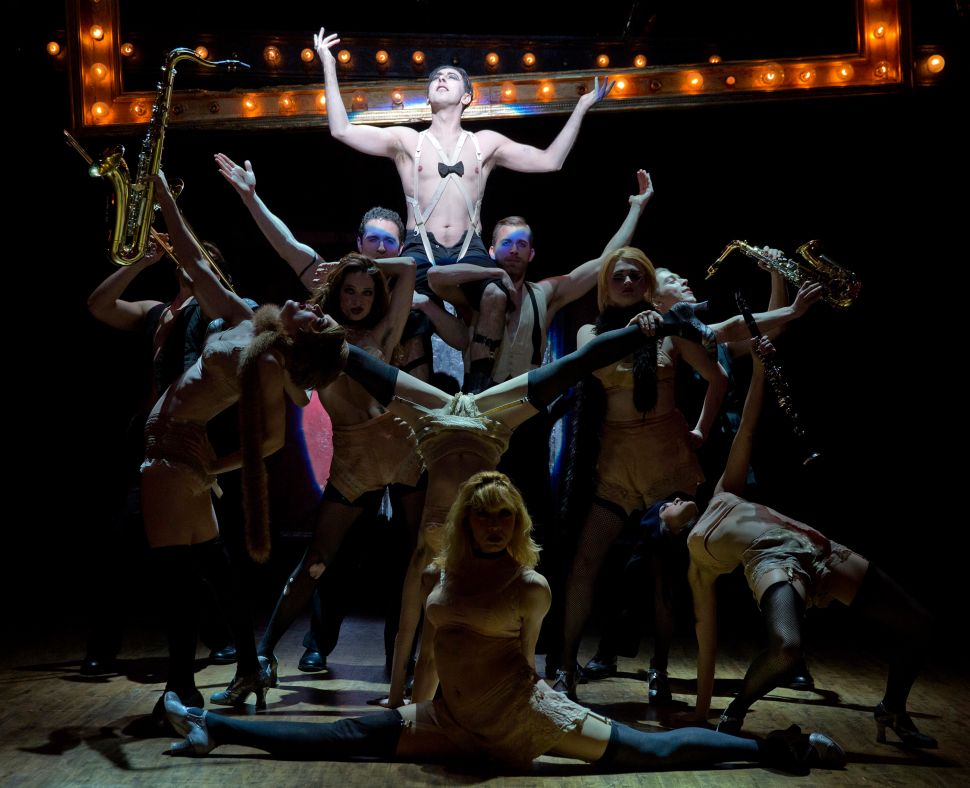