It’s important to have a decent number of fight songs that will pick you up and make you feel like you can do anything. It’s especially crucial in these trying times, when jobs are scarce, winter is never-ending and even the moon is conspiring against us. For me, these songs tend to have certain things in common: they’re upbeat, they’re catchy, and they all run on some combination of femininity and aggression. Sleater-Kinney,  L7, Hole, The Gossip, Icona Pop and Le Tigre have all produced albums that are standbys for me, and now I’m adding a new one to the mix: Heartsrevolution‘s Ride Or Die, especially the title track, a candy-coated call to arms.

All distorted vocals, blown out guitars and driving electro beats, “Ride Or Die” functions as a preview of what’s to come, as well as a call to action. “Excuse me, I got something to say!” chants Leyla “Lo” Safai before saying a whole album’s worth of stuff. “Nobody puts baby in a corner/If you try to do it, do not say I didn’t warn ya,” she continues, the perfect cheerleader for whatever struggles you’re currently engaged in. Take that, dishes! Take that, patriarchy! It occupies a bit of the space carved out by Peaches, JD Samson and Le Tigre, artists who understand the radical potential of dance music.

Sonically, it’s similar to electropunk upstarts The Deathset, but it’s unapologetically pink and sparkly. Did I mention that the CD comes with a lollipop, crayons and a coloring/activity book with an anime version of the band on the cover? And that the band drives around in a Swarovski crystal covered ice cream truck? This woman is not afraid to wear her girliness like a suit of armor.

Listening to Leyla address such wide-ranging issues as living life to the fullest, making music from the heart, violence against women, and our shallow celebrity culture in a sincere (if at times a bit on-the-nose) manner taken straight from her riot grrl past, I’m reminded of a trollsome article from a couple years back that said women are embracing “girly” clothing and lifestyles as a way to avoid dealing with serious issues. That’s obviously ridiculous. There’s no secret chemical in hair bows that sucks out your brain through your scalp, and it’s possible for a creative person to incorporate play into her life while caring deeply about the world around her. Some subcultures, like Japan’s gothic Lolitas, even use childlike fashions as a way to resist society’s hypersexualization of female bodies, a perfectly understandable reaction to a violent, misogynistic world. Given her love of Japanese culture, this thought has probably crossed Leyla’s mind, although she mixes it up by adding elements of punk and hiphop to her look and sound.

Heartsrevolution has been a band since 2004, and after a few false starts, they seem to have finally found a good home on Skrillex’s OWSLA label. They’re currently off playing Coachella and shooting videos in a bit of well deserved payoff to years of hard work and ice cream slinging. I’ve been a fan for some years, so it’s nice to finally see them reach a wider audience without giving up the any of the things that make them great. Congratulations, Ben and Lo! May your hypercaffeinated pop-rock cheer on a new generation of girls and boys as they fight for their existence on this troubled planet. 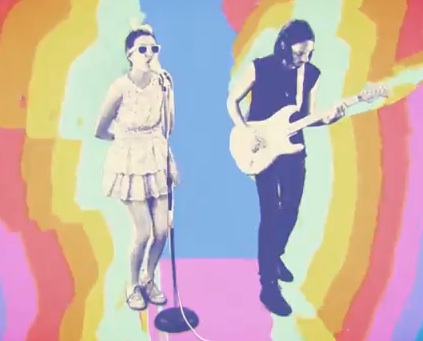