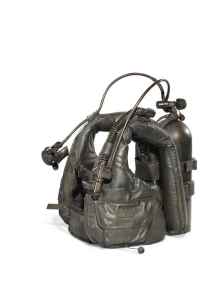 When Christie’s sends out a news flash with a phrase about how an upcoming auction “encapsulates the gritty underbelly-esque side of Contemporary art,” and said release is illustrated with work by Andy  Warhol (estimated price: $7.5 million to $9.5 million), Jeff Koons ($9 million to $12 million) and Martin Kippenberger (again, $9 million to $12 million), well, you gotta wonder what Christie’s definition of “gritty” is. I once had a homeless guy take a pee on my shoe as he walked backwards on a C train (if nothing else, he had really great aim), but yeah, sure—that seven-figure Jeff Koons really exposes the underbelly of a lot of stuff.

Some gems from the press release, presented here out of context and for your consideration:

-“convey the darker side of what art can be.”
-“Carefully assembled”
-“some of the most influential artists”
-“Tough, controversial, and beautiful”
-“Built around a mood and an atmosphere”
-“special works that have left a lasting imprint on the visual hard drive of our generation”
-“wow-factor”
-“a rare opportunity to see these radical works activating each other”
-“decisive vision”
-“instinct for great objects”
-“Tight and very edited”
-“a great platform”
-“defining works”
The auction is called “If I Live I’ll See You Tuesday…” and takes its name from a Richard Prince painting. Richard Prince, if I may borrow another phrase from the press release, is “transformative for an entire generation.” The auction was organized by Loic Gouzer, who told The New York Times‘ Carol Vogel that he was impressed with how much money Christopher Wool’s Apocalypse Now recently made at auction. He hopes to appeal to, in the words of Ms. Vogel, “the raw angst” of a “generation of rich embryonic collectors.” (That article by Ms. Vogel also includes this remarkable description of works by Mr. Prince: “’Nurse of Greenmeadow,’ from 2002, one of the seminal paintings based on a pulp romance novel, which is estimated to sell for $6 million to $9 million, and one of his seminal cowboy photographs from 1999, estimated to bring $3 million to $4 million.” Please note the use of “seminal” twice in the same sentence.)
The sale takes place May 12, a kind of supplement to Christie’s Post-War and Contemporary evening sale the next day. In the meantime, Mr. Gouzer will be promoting this comparably dark, gritty sale on his Instagram.