Mack, who faces 20 years in prison when he’s sentenced in May after a jury found him guilty earlier this year on six counts of bribery and extortion, reined over the city under a cloud of doubt from critics who lobbed claims from the onset of his term of unethical behavior as the city bore witness to a spike in violent crimes and homicides.

Six candidates are vying for an opportunity to succeed the ousted mayor – James Golden, Eric Jackson, Oliver “Bucky” Leggett, Kathy McBride, Paul Perez and Walker Worthy – as many on the campaign trail concede the race is headed for a runoff election.

A mayoral hopeful needs 50 percent plus one if he or she hopes to avoid the runoff. Otherwise, there’s a race between the top two vote getters.

The latter, most agree, is the more likely of the two outcomes.

Now, with Mack staring down the possibility of a lengthy prison sentence sometime after his initial arrest halfway during his first term, mayoral hopefuls running on a platform of integrity and restoring trust have rushed to grabbed voters’ attention.

Jackson, who failed to clinch a spot in the runoff election four years ago by less than a half-dozen votes, is largely accepted as the leading candidate in the nonpartisan election. Previously a Trenton public works director under Palmer, Jackson’s currently occupying the same title for the city of Plainfield (a position he accepted after briefly working under the Mack administration).

He receives establishment support within the city, including that of the former mayor.

“The reason I’m supporting him is because I have seen him up close in personal and worked with him for 12 years,” Palmer told PolitickerNJ sometime before the filing deadline for the May 13 election.

“He truly knows the job because he’s been there,” he said. “He’s been there and seen how government works and how hard things are … [and] he knows it’s a critical time.”

But Palmer support can be a double-edged sword, as opponents running on a platform of new direction have argued a Palmer candidate would continue the city down a path of wrong direction.

However, Jackson supporters argue Palmer’s popularity among Trenton voters has not waned. In fact, they say, citing internal poling, if Palmer race for another term in office he would be welcomed back by the electorate.

“If you were polling you would know that it’s a bad thing to attack Doug Palmer,” a source told PolitickerNJ.

Worthy, a deputy county clerk, is said to have access to donors some argue could put him in a runoff with Jackson. According to his latest New Jersey Election Law Enforcement Commission report, Worthy’s raised more than $110,000 for his campaign and spent nearly $68,000 as of mid-April.

However, opponents are quick to point out lackluster support from officials who could influence the race – namely Assemblywoman Bonnie Watson Coleman (D-15) – is evidence Worthy is seen as trailing in the polls.

Watson Coleman, who’s currently competing in a closely watched Democratic primary to succeed outgoing U.S. Rep. Rush Holt (D-12), headlined a March fundraiser for Worthy along with Mercer County Executive Brian Hughes, but the consistent vote getter in her district has been few and far between on Worthy’s campaign trail.

As city residents witness an uptick in violent crimes and homicides, Golden, who served briefly as Trenton’s police director in 2000-2001 before being tapped security chief for Philadelphia International Airport, has billed himself as the law and order candidate.

Whether it’s holding a campaign event on a Trenton street corner in front of a shuttered police substation or reminding voters he was involved in the Mack recall effort, Golden hopes voters tired of the status quo and worried about their safety will join “the Golden team.”

Supporters say Golden’s campaign affords residents an opportunity to elect a mayor who has zero political establishment ties and doesn’t need to answer to anyone. However, critics point to his checkered employment history (including being fired, and later rehired, from the federal airport security job for improperly hiring his son-in-law as a supervisor) as evidence a Golden administration would hardly be a departure from the past.

“I was terminated and challenged that termination,” Golden said, adding his challenge was successful and noting his son-in-law was qualified for the position.

“We’re working very hard as we have been for the last year and a half,” he said. “We’re hopeful that we can emerge victorious.”

But if four years ago is any indication, Trenton’s African American vote could divide between candidates and Latinos will stand together around Paul Perez.

Manny Segura squeaked into the runoff against Mack four years ago thanks in part to Trenton’s Latino population – which grew 56 percent from 2000 to 2010, according to U.S. Census figures.

“They’re not the guys,” said Perez, referring to the establishment candidates whose campaigns are backed by former city leaders or county government officials.

“These guys are the guys who are responsible for the situation that the city finds itself in right now,” he said. “The city cannot continue to afford … [electing] a leader who has controversy in their background.”

Perez called it “presumptuous” to pick sides in a hypothetical runoff election and argued instead his campaign will continue its grassroots outreach into the final stretch.

“I think these guys who have been around for the past 24 years have continued to use this old playbook,” he said. “That’s why they don’t understand what’s happening right now.”

Leggett has next to no money in his campaign account, but that’s almost a source of pride to the former Housing Authority director who presents himself as a street guy with deep roots in the city.

He’s somewhat of a local celebrity, having once just missed going to the Olympics as a boxer. His job in housing, too, gave him high visibility among seniors and old time Trentonians.

Instantly recognizable in bow tie, the well-spoken Leggett has excelled in the debates by reminding voters of his executive experience and community origins in a small, very cliquey city. When Perez stood up at one forum and declared, “I am in Trenton,” Leggett scored a big laugh in the room when he one upped him with the line, “I is Trenton.”

Sources say Leggett at the very least complicates matters for Worthy and Golden in being able to establish themselves as the authoritative Black alternative to Jackson.

Update: Golden’s fundraising totals were updated to reflect $51,042 he reported raising through a joint committee account “Trenton Forward.” Golden reported raising $49,109 by mid-March under his personal account and has been raising funds through the joint account since March, according to his campaign and ELEC reports. 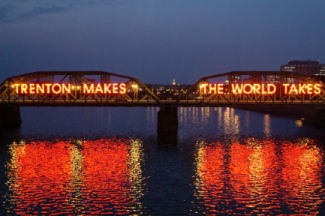