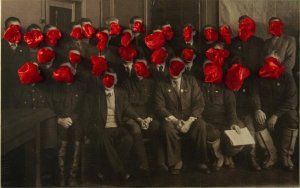 Born in 1955, the artist graduated from the Moscow Institute of Graphic Arts in 1978, and has been living and working in Russia and the US since 1992.

In that time, she has taught contemporary art at Wayne State University in Detroit, Michigan, Carnegie Mellon University in Pittsburgh, Pennsylvania, and The International Summer Academy of Fine Arts in Salzburg, Austria. She currently has a solo show up at Nailya Alexander Gallery, where she is represented in New York, entitled “Moscow Diary” (the show opened yesterday and will run through May 17th). Other solo shows in New York have included “Disagreeable Matters-Disarming Icons” in The Windows Gallery at New York University’s Kimmel Center in 2007,  “Probably Would” at Nailya Center in 2005,  “Recent Works” at Phyllis Kind Gallery in 1992, and “Momentum Mortis” —also at Phyllis Kind—in 1990.

An installation artist and painter, Nakhova is a member of the unofficial artists’ group the Moscow Conceptual School. Her work is in museums and private collections in the US, Russia, France, Germany, Great Britain, Italy, Spain, Sweden and Switzerland.