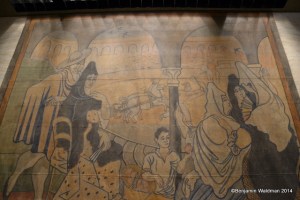 The decision marked a victory for the New York Landmarks Conservancy, which owns the tapestry and fears that moving it will damage it irreparably. Early this year the NYLC sued RFR, whose co-founder Aby Rosen is an avid art collector and a public proponent of moving the work. Future hearings will determine if an injunction will be granted, barring Mr. Rosen in a stricter way.

The restraining order followed efforts to stop Mr. Rosen from moving Le Tricorne (1919), which has hung at the Four Seasons since 1959 and was bequeathed to the conservancy in 2005. The NYLC says that Mr. Rosen simply wants it gone (The New York Times reported that one person has heard him refer to the work as “a schmatte“); RFR says it needs to be moved so that repairs can be made to the wall behind it.

“Andy Warhol painted many paintings of the same thing many times, said NYLC lawyer James Rowland in court Wednesday. “This work is one of a kind.”

Much of the day’s contentious hearing concerned a motion to dismiss the case by RFR, which the NYLC’s lawyers eventually defeated by arguing that the degree to which the company had planned to remove the tapestry without the NYLC’s consent—which included a 3 a.m. moving operation on Feburary 9, rolling it up “one click at a time,” according to RFR lawyer Andrew Kratenstein, before transporting it to a hired van—constituted “efforts to exercise unauthorized dominion and control over the Picasso Curtain to the derogation of and exclusion of NY Conservancy’s ownership wrights.”

If not for the temporary restraining order “on Feburary 7, it would have been gone Feburary 9,” Mr. Rowland said.

“You’re alive,” Judge Edmead told Mr. Rowland after she threw out the motion to dismiss. “You’ve killed them off, partially.”

Much of the hearing concerned RFR’s motivations to move the work. Judge Edmead opened by quoting the Four Seasons lease that said any repairs to the building may be done “as landlord may deem necessary or desirable,” then asked Mr. Kratenstein whether his client saw these repairs as more necessary, or more desirable. He said RFR saw them as both.

Later Mr. Kratenstein described the damage, its main symptom the movement of panels behind the curtain, by a few inches, for unknown reasons. This movement, he said, was possibly related to steam from the Four Seasons kitchen behind the wall.

“Everybody agrees that there’s some movement in these panels,” he said, admitting that engineers from the NYLC saw the movement as less severe.

Mr. Rowland rebutted that more monitoring of the panels was necessary, pointing out that the tiles in the kitchen itself were fine.

“The tiles being touched by this moisture show no such movement,” he said. RFR, he said, declined to monitor further movement of the panels via “movement trackers, baroscopes and laser scans.”

Judge Edmead told lawyers to ready their experts for the next hearing, at which she will decide whether she will issue a preliminary injunction against the movement of the tapestry. If that effort is successful NYLC will seek a permanent injunction.

“We get to have our day in court,” Peg Breen, the president of the New York Landmarks Conservancy, said after the decision. “We’re delighted.”