The members of Jukebox the Ghost, sitting in Pete’s Candy Store in Williamsburg after a recent rehearsal, can barely contain their excitement about a song they’ve just played.

“It has a really good key change for the chorus,” says guitarist/vocalist Tommy Siegel.

“The parts are smart,” adds keyboardist/vocalist Ben Thornewill. “The lyrics are choppy [and] use the word ‘prerogative.'”

They’re talking about Shania Twain’s upbeat “Man! I Feel Like a Woman!,” which the band plans to play during a covers set—to be followed by originals—at the Knitting Factory on Thursday night.

If you feel it’s strange for a young Brooklyn-based band to heap praise on a sassy 1990s country hit, its members are way ahead of you.

“Every single time we learn a [cover] song,” says Siegel, “the first time, I’m like, ‘This is ridiculous. Why are we doing this?’ [But] by the time I’ve actually learned it, I have a real respect for the songcraft.”

Thornewill adds, “There’s a reason it resonates and sticks, and a good song is a good song.”

Other covers in the band’s rotation include Rage Against the Machine’s “Guerilla Radio,” Whitney Houston’s “I Wanna Dance With Somebody” and Huey Lewis and the News’s “The Power of Love.”

Having made three albums, Jukebox the Ghost’s kitchen-sink approach has been part of its charm but has also left the band without an obvious niche. Thornewill and Siegel trade off lead-singer duties, and their catalog includes lovelorn pop cuts (“Don’t Let Me Fall Behind”) alongside apocalyptic, jittery rockers without discernable choruses (“Where Are All the Scientists Now?”).

“We’re not cool enough for the cool kids, and we’re too cool for the not-cool kids,” says Siegel.

To hear them tell it, the band’s scattershot songwriting tendencies will be reined in for album number four, which the band recently recorded and expects to release this summer or fall. The emphasis on focus will continue a trend Jukebox the Ghost started on its third album, Safe Travels.

“Jukebox the Ghost is a little bit of a hive mind at this point,” says Siegel. “When I listen to the new record, the differences between our songwriting styles are not as apparent as they once were.”

When it comes to describing the new LP, that’s pretty much all they agree on.

“I don’t actually agree,” says Thornewill, “with the whole record being singles.”

Drummer Jesse Kristin, whose performance style is distinguished by a permanent “shit-eating grin” (his words) jumps in. “Our songs are more formulaic on this,” he says. “We’re using [the] pop format, and just going with it.”

“I don’t know if I even totally agree with that, either,” says Thornewill.

“Keep in mind,” says Siegel, “this is the first interview we’ve done talking about this record, so we haven’t really gotten the PR statement together.”

“We probably should have had a pre-interview discussion about how we’re going to talk about the record,” Thornewill notes.

The band members finally settle on the idea that the new album is a “party record.”

What kind of party? 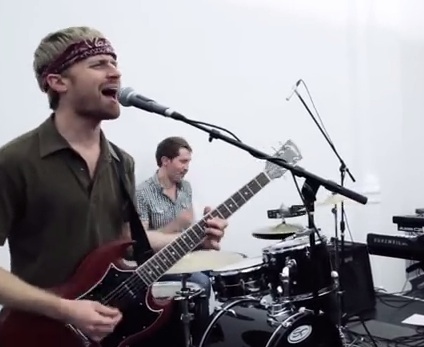