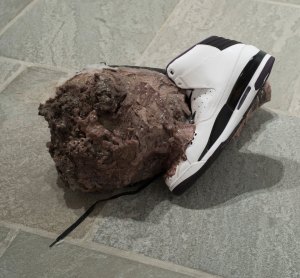 ‘Untitled (Jumped Man)’ (2014) by Beasley, which is in this year’s Whitney Biennial. (Photo by Bill Orcutt, courtesy the artist, Casey Kaplan and the Whitney Museum)

Chelsea’s Casey Kaplan gallery has told us that it now represents Kevin Beasley and Mateo López, who both appeared in the charming three-person show that just closed at the gallery. (Painter Harold Ancart rounded out the exhibition.)

Mr. Beasley, who was born in Lynchburg, Va., and lives in New York, works in a variety of media, with an emphasis on music and performance, and is currently an artist in residence at the Studio Museum in Harlem. His art appears on the third floor of this year’s Whitney Biennial, and he’ll be performing at the Whitney on May 14, 16 and 17.

Mr. López, who makes elegant, spare and sometimes slightly whimsical drawings and sculptures that often incorporate narrative, has been a busy man of late, with solo shows over the past two years in Buenos Aires, Madrid and his home town of Bogotá, Colombia.