Maybe the letters got stuck in there?

An actual snail would have delivered this message faster.

Susan Heifetz received some seriously belated birthday wishes last week, when she received a 19th birthday card sent by her parents — in 1969.

Ms. Heifetz discovered the long-lost card when she received a call from a man living in her childhood home in Homecrest, who found the letter in his mailbox last Thursday. Ms. Heifetz, who now lives in Marine Park, was skeptical, until the man described the lipstick marks on the back of the envelope; that’s when Ms. Heifetz knew the letter had been sent by her mother, who has since passed away.

If this sounds like the most nostalgia-inducing event of all time, wait; there’s more. A few days later, the same man who received the birthday card received another letter addressed to Ms. Heifetz, from an old boyfriend who was stationed in Vietnam in October 1969. The first line of that letter, from Sgt. Mark L. Wolf, reads, “Don’t remember me? Let me remind you.”

This could be something out of a movie, if only it followed the classic rule of three. Oh wait, it does: the post office found a third letter from that same year addressed to Ms. Heifetz, this one a birthday card from her brother.

Is this the worst USPS mess up of all time? Probably not. According to the post office, it’s more likely that the letters were held by someone for years before being resent to Ms. Heifetz.

“What we typically find is that old letters and postcards — sometimes purchased at flea markets, antique shops and even online — are re-entered into our system,” post office spokeswoman Congetta Chirichello told The Brooklyn Paper.

Ms. Heifetz’s 19th birthday must have been incredibly depressing, considering she received no birthday wishes from her family. But now, she sees the discovery of the lost cards as a blessing in disguise. Ms. Heifetz had been planning to move to Las Vegas, but was upset that no one would be visiting her parents’ graves.

“With all that I’ve been going through, I take this as a sign that my parents will find me no matter where I am,” she told The Paper. “This, to me, was the closure I needed.”

The US Postal Service is lucky Ms. Heifetz handled the situation so well; some of its other customers are less forgiving. 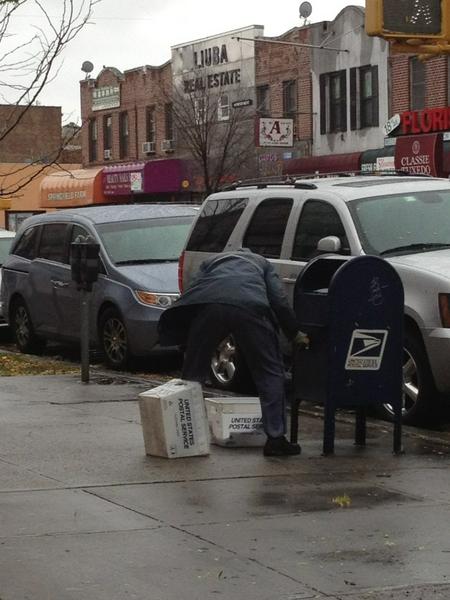