As Lady Gaga closes out Roseland Ballroom’s long and distinguished run with seven nights’ worth of sold-out shows, scalpers are taking the opportunity to harvest hundreds of dollars a ticket on Stubhub and other resale sites. If you are the parent of a Little Monster, there’s likely no suitable alternative—besides telling your child “no,” of course, but what well-to-do Manhattanite does that? But if you’re more of a casual Gaga fan (do those exist?) looking for a musical experience that’s equal parts art, pop and female empowerment, might I suggest the relatively affordable but equally capslock-tastic event that is Holychild at MoMA? They’re fun, they’re thoughtful, and their show only costs $24. Bonus: they’re not pals with Terry Richardson, nor do they go about behaving like their music cures cancer.

Comprised of singer Liz Nistico and multi-instrumentalist/producer Louie Diller, Holychild makes bouncy electro-pop with notes of tropicalia and lyrics that explore issues of female objectification and the complex, often conflicting feelings it elicits. For this edition of the MoMA’s PopRally series, they’ll be performing at an event showcasing Robert Heinecken, the American “paraphotographer.” In addition to these sights and sounds, there will be a special screening of the band’s conceptual video trilogy, making for quite the multimedia experience. On the eve of this special performance, the band answered some questions via email.

How did this gig come about? Have you ever played at a museum before?

Diller: It was facilitated by our fabulous record label Glassnote Records, but as how most things have gone for us so far, it has been a team effort, so we are just going to credit everybody on team Holychild for making this special event happen! We have never played at a museum before, but are honored that MoMA is allowing us to do our thing within their walls. It is such a venerable institution, we couldn’t be more thrilled to have this opportunity.

Did you like Robert Heinecken’s work before this? How does it fit in with your performance?

Nistico: I adore Robert Heinecken! I hadn’t heard of him before this exhibit, but after being paired with him I did my research and I am so honored to play with his work in my presence! His art is really in line with my vision: exploring the role of the woman in our culture in a sexual way. I really like the way he draws people in with alluring images and makes them think after the fact: that’s really what we’re trying to do with our music.

What can people expect to see at the MoMA show/how will it be different from a regular concert?

Nistico: The MoMA is going to be so special. Not only are we being paired with the fabulous Robert Heinecken but we’re screening the music video trilogy that I wrote and directed, and those explore a lot of the same concepts in Robert Heinecken’s work, as well as our music. I really want this whole night to be an experience, it’s going to be a mix of all forms of art, which is really how I envision Holychild. I want people to understand all facets of our art, and this night is really going to explore that.

You explore some rather feminist ideas in your lyrics, and I especially like it that you don’t pretend to have all the answers. Do you adopt the feminist label?

Nistico: I skirt around labels, I think I’m just one of those people. That being said, sure, I’ll say I’m a feminist. However you’re right, I’m just trying to think about my role in our culture and understand it, and I happen to be doing that through my art and music. I definitely don’t have all the answers and I feel really vulnerable at times making claims and then feeling like a hypocrite because the next day I feel differently. This is an exploration and my goal is to just open discussion and try to come to some sort of understanding with my fellow females, if possible!

What role does the fun/poppy/tropical music play in conveying your ideas to the listener?

Diller: The role of fun/poppy/tropical music is critical for drawing in listeners of all stripes with a first listen. One goal of ours with Holychild is to make our music accessible and immediate enough so we can connect with a broad range of folks on this first listen, but then challenge them in turn with relatively deeper things such as Liz’s lyrics, syncopated rhythms, absurdist imagery, unexpected harmony, etc.

Which artist or artists would you most like to play with?

Diller: A bunch! Everybody from Kimbra, to Marina and the Diamonds, to St. Vincent, to HAIM, to OutKast (which we’re actually doing this summer!), and a whole boat load more we won’t ramble on with! 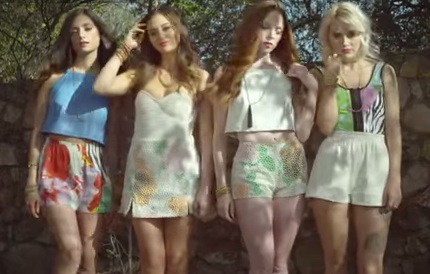