Vampires are a dime a dozen these days, but you’ll never find a more glamorously decadent couple with fangs than Tilda Swinton and Tom Hiddleston in indie writer-director Jim Jarmusch’s elegant and idiosyncratic Only Lovers Left Alive. She is Eve, a vaporous creature who awakes in the darkness on rose-colored satin, pale and bloodless as a corpse at the morgue made up for an open-casket viewing, and begins her nightly rounds through the alleys of Tangiers. He is Adam, a reclusive rock star who lives in a derelict mansion in Detroit surrounded by thousands of dusty old Motown records. They’ve been lovers for four centuries and look every minute of it. Two hours and three minutes is way too long for a movie about anything, especially vampires. But it’s so elegant and dreamlike—such a departure from most vampire epics—that you won’t be bored. It also has a wicked sense of humor you usually don’t find in the genre.

Adam and Eve are New Age vampires with Old World values. Blood is for cornballs like Dracula. The new “in” thing is plasma. Eve gets hers from her mentor, centuries-old playwright Christopher Marlowe (a mummified John Hurt), who still mopes through life seeking recognition for writing Shakespeare’s plays. Adam goes to a hospital blood bank calling himself Dr. Faustus and buys his from Dr. Watson (Jeffrey Wright). Yes, they’re still around, along with Byron, Shelley, Kepler, Darwin and Copernicus—some of whom make guest appearances—some older and wiser than others (“You missed all the fun—inquisitions, the floods, the plagues”) They shun living mortals, called “zombies,” and just want to be left alone with their cell phones and Skype TV.

Marlowe envies Eve’s long distance affair with Adam (“I wish I had met him before I wrote Hamlet—he would have been the perfect role model”), but when she decides to travel all the way from Morocco to Michigan for a lovers’ reunion (an arduous trip, to be sure, traveling only by night), he promises he’ll be waiting when she returns, with a fresh supply of “the good stuff.” Mr. Jarmusch photographs Detroit like the bombed-out ruins of Beirut, with a moody palette of moonlit purples and navy blues. After a long nap, the lovers languish about in post-coital bliss sipping plasma provided by Adam’s assistant and rock fan, Ian (the always excellent Anton Yelchin), who polishes the plasma decanters and supplies necessities like phonograph needles and even a wooden bullet with which Adam contemplates suicide. “I love your new music,” coos Eve. “Reminds me of the time you gave that string quartet to Schubert.”

For fun, they tour the ruins of the Motown Museum and the abandoned Ford Motors plant, feasting on midnight snacks of blood popsicles. But soon their debauched reverie is invaded by an unwelcome visit from Eve’s restless and provocative sister, Ava (Mia Wasikowska), who breezes in from L.A., drags them out to discos, seduces Ian and drains his jugular, exposing them to the thing they fear most: a bad supply of “zombie contamination.” Suddenly, Adam becomes too ill to watch YouTube, so Eve uses her credit cards and rushes him back to Tangiers. But things have turned sour there, too. What happens when the blood supply dries up and they have to revert to the good old days?

Only Lovers Left Alive is bizarre enough to appeal to my most perverse basic instincts, with haunting cinematography powered by throbbing guitars and a rubbed in a heroin-chic patina that looks like another emaciated Calvin Klein ad campaign. The dry wit blends with a tender essay on science, music, art and times gone by that is sometimes disarmingly poetic. Jarmusch movies are almost always self-indulgent, hallucinatory riffs on toxic society and brain-dead rock music (his own rock band, Squri, is as low as it gets), but this one has a refreshing refinement. As the undead lovers, Ms. Swinton is a feline fashion layout, and Mr. Hiddleston, as a dead rock star who looks like Mick Jagger in Performance, is a bare-chested poster boy for bohemian allure. Ms. Wasikowska continues to amaze with her ability to sustain a career despite a name nobody can pronounce. Luckily, she has enough talent to survive. They’re all riveting, in a freaky but fascinating film that takes a new bite out of vampire movies. 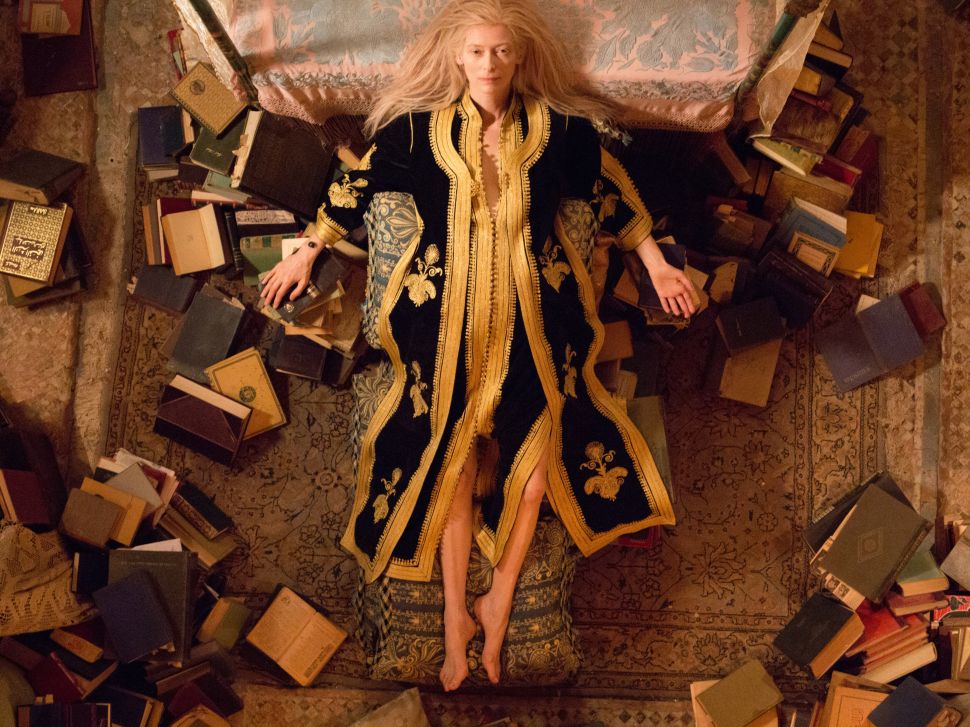