In this week’s episode of Mad Men, Don got his job back and Megan said she wanted out of their marriage. These were two events we’ve all been waiting for, and they came out of nowhere. There were no fireworks, no dramatic cuts, no extended silences or swelling music.

Instead, the episode’s big moments came mostly from Betty and Bobby’s trip to the farm, while the workplace happenings were jumbled and messy — as those things usually are in real life. Like last season’s “The Crash,” it might have left some viewers feeling weirdly dissatisfied. So much happened, but without the typical cinematic signifiers that accompany big plot turns and twists.

Last week’s episode, with its series of emotional and professional victories, contrasts with this week’s “Field Trip.” Three women accepted promotions with zeal in that ep. This week, one man gets his job back and not even his wife is excited for him.

It’s probably not even news to Don that his marriage is over. Frankly, we’re surprised Megan held on as long as she did.

In the first two episodes of this season, we see Don treating Megan like one of his kids. He shields her from the truth about his job, he tries to curry favor by buying her a new TV. In the first episode, he even looks like he’s her father. It’s been going on since Megan quit working at the agency to try her luck at acting, really. Don eschewed her for a woman closer to his age, and made major life plans — like the California move — expecting Megan would have no choice but to come along.

This week, Megan has finally had enough. Her agent, Allen Silver, calls Don to tell him Megan’s been, in Don’s words, “acting like a lunatic.” He flies out to California under the guise of surprising her, when really he’s checking up on her to make sure she’s not hysterical. It’s a perfect invitation for him to parent his wife. She catches on in less than an hour.

It’s an ugly depiction of retro sexism, with the two men secretly chatting to figure out what’s best for Megan. And it’s majorly ironic. Don has a lot of nerve to call his wife a lunatic when, just a few months ago, he acted like “a guy who walks around wearing a cardboard box that says ‘the end is near'” in a meeting with Hershey, as Roger says later in the episode.

“Thanks for the visit, Daddy,” Megan snips. “I’m stupid for thinking you could possibly miss me.”

After Megan interprets Don’s shadiness and strange phone habits as evidence of an affair, he finally has to confess that he was put on leave.

Megan reacts like a true grownup in this situation, coolly telling him he has to leave. “I want you to call a cab, get on a plane and go home,” she says. “I don’t want you to worry about me anymore… This is the way it ends. It’s going to be so much easier for both of us.”

It feels pretty anticlimactic — there are no tears, at least not until a phone call between Megan and Don later in the show. During the call, Don apologizes and then apes Sally’s behavior from the previous episode. He tells Megan he loves her — isn’t this the first time we’ve ever heard him say those words to her? — and Megan responds, “Good night.” Sally already had the upper hand emotionally when she said she loved Don; that’s why it was such a punch in the gut for him. As far as Megan’s concerned, though, it’s too little too late.

Later, when Don uses an offer from another agency to get his job back from Roger, it’s far from the triumphant welcome-back Don probably thought he’d get. He’s fallen so far now, he accepts the indignities of Peggy telling him she “can’t say that we missed you” and the cold shoulder he gets from everyone but the only four guys in creative who still rank beneath him.

Combined with the intermittent shots of him staring at his watch and the floaty Steadicam sequence of how he sees the office upon walking in, the whole thing feels like a clunky, disorganized dream. It’s not exactly nightmare status; the action is just confusing and, to Don, inexplicable.

He then accepts the saddest return deal of all time. It’s a major demotion. And if he steps one foot out of line, and he’ll be worse off than he was on leave. His only hope at this point is for Lou Avery to get caught embezzling or something equally heinous.

This also highlights the breakdown in understanding among the remaining partners. Some thought Don’s leave was temporary. Others assumed he was fired. And somehow, Lou Avery snagged a two-year contract. Clearly, he doesn’t see himself as a temporary replacement.

But hey, Don’s got his job back. And apparently that’s more important to him than being with Megan, who points out that good news would be Don getting a job in California. There’s still a chance SC&P could send him out west, although Pete and Ted were strangely absent from this episode.

It especially doesn’t bode well that Don’s been given Lane Pryce’s old office. He’d better get out of there as quick as he can.

While Don is hanging around SC&P like a sad teen who’s desperate for the popular girl to notice him, Betty’s chaperoning a field trip for Bobby. Before that, though, she meets with Francine, her plucky friend from the old neighborhood. Their conversation is full of subtle digs, with Betty implying that Francine is somehow deficient as a mother for seeking satisfaction through her three-day-a-week travel agent job, and Francine straight up telling Betty she’s old-fashioned.

So later, when Betty accompanies Bobby’s class to a potato farm, she’s probably already feeling threatened by her continued stay-at-home mom status. One of the main themes of this arc is Betty’s disgust at the teacher’s failure to wear a bra — again, so old-fashioned. Another mother shares Betty’s horror. Ironically, they gossip about the teacher’s lack of bosom support while standing outside the barn puffing away, choosing to pollute the pastoral air with cigarette smoke rather than join their children inside. Who’s really doing the kids a disservice in this situation?

The shots at the clean, open farm stand in stark contrast to the look of chaotic SC&P. Betty looks cool and perfectly controlled, her hair refusing to budge an inch, even when she puts on and takes off her sunglasses. Betty’s the picture of midcentury perfection with her hairspray, cigarettes and no doubt bulletproof shapewear. The teacher — who could be spending more time with Bobby than Betty does — has undone hair, jeans, and the bare minimum of undergarments. She’s another woman who’s gotten with the times while Betty lags behind.

Midway through the trip, Betty’s apparently had enough. When she finds out Bobby traded her sandwich for a bag of gumdrops, she turns on him.

“I didn’t think you were going to eat,” Bobby swears. And who could blame him? Aside from that one bloated blip a couple of seasons ago, Betty’s never been one to consume solid foods. Still, she won’t forgive him. She forces him to eat the gumdrops while she sulks and smokes.

Later on, a pouting Betty tells Henry her children don’t love her. Whether that’s a fabrication to get pity from her husband or not, it’s a reminder that Betty and Don were, at one point, a manipulative and narcissistic match made in heaven.

HARRY: The irascible, whiney media guy might finally get his way with something — although Jim Cutler’s passing Harry’s request off as his own idea. Harry is the perfect example of someone who’s good at his job, but awful to work with thanks to his anxiety and neuroses. Roger needs to pass him some of whatever he’s smoking these days.

ROGER: Did he finally accept Don’s olive branch because it’s good for business or simply in the spirit of peace and love? Let’s not get too carried away here. He might be a little more boho these days, but Roger’s still Roger. It was probably a combination of recognizing that Don is better at his job than Lou, and the fact that he misses his friend.

JOAN: Her remark that Don might not fit into the new SC&P was jarring at first, but actually made sense. Joan has been sick of Don’s antics since he killed the Jaguar account. She might warm back up to him eventually, but it’ll be tough now that she’s getting along so well with the newer partners.

PEGGY: Yup, still miserable. We can’t really blame her after she learns that her Rosemary’s Baby-inspired commercial was pulled from the running for the Clios at the last minute. (Lou says it was Jim’s call, but he’s clearly lying.) And that ad spot was one of Ted’s favorites, making it sting even more, I’m sure. She just didn’t have to take it out on Don the way she did.

LOU: Also still miserable, but without a clear motive for being that way — until Don shows up, that is. Hopefully soon his character will get some depth, because as it is, he’s more annoying than Duck Phillips and Pete Campbell combined. 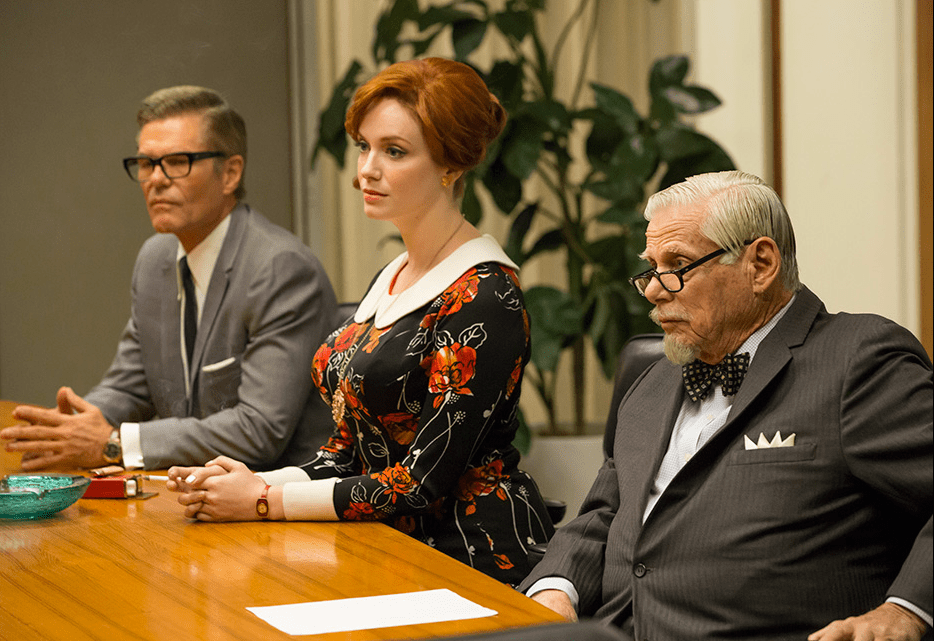