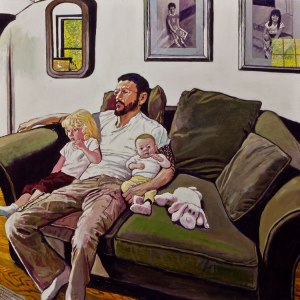 ‘Joshua and His Children’ (2011) by Leipzig. (Courtesy the artist and Gallery Henoch)

Mel Leipzig has his eye on the ball. He paints with four acrylic colors (not counting black), no drawing, the edge-to-edge punctiliousness of a Nikomat and the fluent pragmatism of a courtroom illustrator, but he never loses his grip on the central distinguishing fact of a person or scene. In the 6-by-4-foot College Basketball Coaches, a tall man in black T-shirt and shorts stands holding the worldly orb of an orange basketball in the outstretched fingers of both hands.

Flanked by two shorter women, he keeps his eyes locked on the viewer. Above his head, a ceiling of brown-flecked tan panels, red struts, glowing white lights like holes burned into film, and a glass backboard and basket has the solemn, mortuary complexity of a photograph by Bernd and Hilla Becher but also, because of the slight perspectival distortion introduced by the painting’s seat-of-the-pants construction, the dynamic springiness of a half-open pop-up book.

This eager compression continues down through walls and bleachers and into a shiny hardwood floor with the coaches’ three reflections hanging down, all of them pointing, silently patient but with massive force, to the central coach’s head. The complex structure of the ceiling emanates from his brow, an aestheticized abstraction of the plays he must have in mind; the two black poles supporting the backboard form an arrow; and a small American flag is at his shoulder. My guess is it’s the woman to his right who’ll be joining him in heaven.

In Joshua and His Children, a 4-foot-square portrait of the artist’s adult son with two of his own children in an overstuffed green couch, Mr. Leipzig turns from the transcendent to the immanent. It’s the infant in the crook of Joshua’s left arm who catches the viewer’s gaze this time, but he’s doubled by the beady, black eyes of the plush, white dog sprawled beside him. Six panels of bright-green leaves from outside are reflected in a black-and-white childhood photo of Mr. Leipzig’s daughter, Francesca, on the wall; the room orbits in a circle around the baby’s head, instead of channeling toward it; and the sensual richness of the couch’s velvety browns and greens is like something from The Doors of Perception.

It’s not really a choice, though—only a matter of emphasis. The College Study Abroad Coordinator and Her Daughter sit together in her office, framed by a black and white photo portrait of the coordinator, as a toddler, with her own mother; a large color poster of the Sistine Chapel ceiling next to a smaller poster of Michelangelo’s marble Pietà; a heavy schoolroom clock; a four-color map of the world, with hundreds of national flags in miniature and only the western half of North America cut off; a greenish tinted globe, fronting Asia and Australia; and another family photo, this one a color snapshot. The fact that can be discerned but not quite named is the modest but irreducible source of it all.