Once again, Mayor Bill de Blasio held a Hurricane Sandy-related event on Staten Island. And once again, Staten Island’s only congressman was nowhere to be found.

Mr. Grimm, a Republican, has been highly critical of Mr. de Blasio, a Democrat, for his alleged lack of focus on post-Sandy rebuilding–and the two have repeatedly clashed on the topic, with Mr. Grimm accusing the mayor of refusing to meet with him and Mr. de Blasio accusing him of skippng events.

But today Mr. de Blasio bristled when asked why Mr. Grimm was absent.

“I think the question here is helping people in need. I know that some people want to ask specific questions about politics or personalities but it’s not about that,” Mr. de Blasio told the Observer. “We’ve tried to work with everyone, we will work with everyone. Right now we’re talking about getting people back in their homes, we’re talking about making sure people don’t have to pay more property taxes than they should.”

Mr. de Blasio, who once demanded that Mr. Grimm apologize for threatening to throw a reporter from a balcony, does not have a close relationship with Mr. Grimm. The two sparred again when the mayor accused Mr. Grimm of kipping a previous Sandy-related press conference. (Mr. Grimm was reportedly fund-raising at a Justin Timberlake concert in Washington–though he insisted that was unrelated to his attendance.)

“The people deserve action, not more hollow rhetoric, which is precisely what they got from the mayor’s visit,” Mr. Grimm told the Staten Island Advance at the time. “Rather than waste my time getting no answers at all on Build it Back or the illusive Acquisition Program, I returned to Washington to continue the fight to pass flood insurance reform for my constituents.”

Staten Island Borough President Jimmy Oddo, a Republican who has also been at odds with Mr. Grimm, had little to say about the congressman today.

“I have a standing policy because there are only 24 hours in a day not to comment on that individual,” Mr. Oddo offered.

Mr. Grimm’s office did not immediately return requests for comment on today’s event.

Update (4:20 p.m.): Staten Island Council members Vincent Ignizio and Steve Matteo, both Republicans, also did not attend today’s event. In a joint statement, they said they wanted to “end the press ops.”

“We are happy to see the Mayor has finally come around to support ideas originated on Staten Island that would help Sandy victims – such as acquisition for redevelopment, sending out reimbursement checks, and much needed property tax relief for homeowners who have repaired their homes,” the council members said. “We are grateful for his support and look forward to working with our partners in government on all levels to end the press ops and start the work in our Sandy-ravaged neighborhoods. We also continue to urge the Administration to find a way to fully fund Staten Island University Hospital’s resiliency project, which is crucial to protecting our most vulnerable communities.”

“As the City’s only Congressman in the majority party, you would think that the Mayor’s office would want to keep me fully informed on Build it Back’s financial needs so I can make the necessary requests” Mr. Grimm said. “Yet no one in the Mayor’s office, nor the mayor himself at today’s press conference, seems to know exactly how much Build it Back needs to cover all Sandy victims in the program…and if they do, they certainly aren’t sharing the specifics to help me make a credible case for more funding.”

“The train for the remaining Sandy relief money is leaving, and if New Yorkers are left at the station with a billion dollars in unmet need, then it’s the Mayor who will have to look them in the face and tell them why,” Mr. Grimm continued. “Perhaps if the Mayor spent as much time assessing the City’s Sandy recovery needs as he does trying to take away Manhattan’s horse-and-buggy jobs…we’d be in a better position to fight for the money Sandy victims deserve.”

“We’ve been working very closely with HUD and our federal partners to ensure that NYC has the resources we need to fully recover and rebuild,” said a spokesperson for Mr. de Blasio. 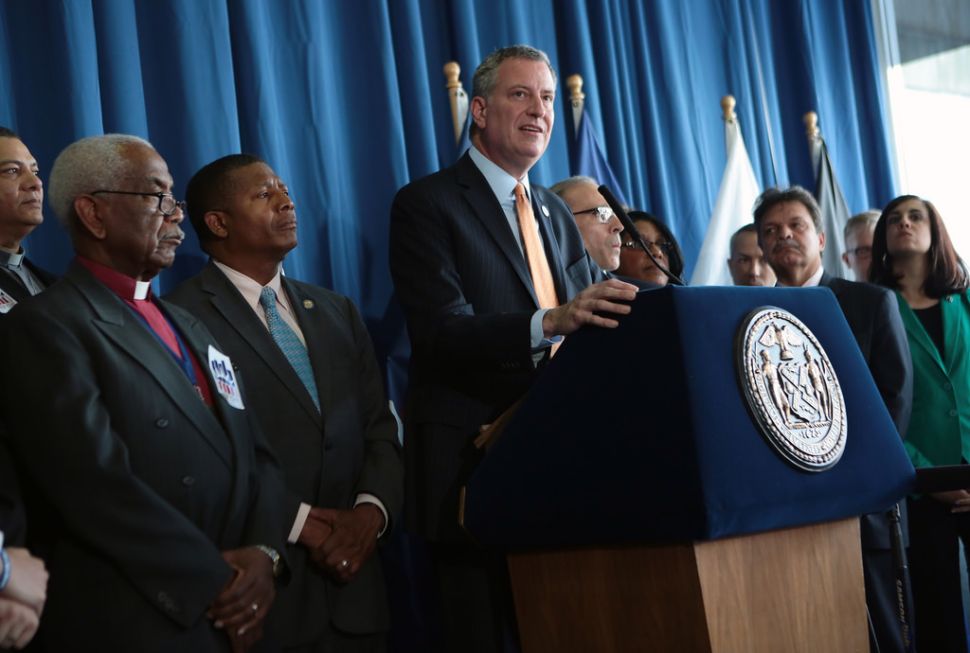