The Museum of Modern Art has filed an application with the city’s Department of Buildings for what amounts to a $1.6 million demolition job at what was the American Folk Art Museum on West 53rd Street.

The major alteration application, filed last Friday, calls for a series of jobs including removal of all above-grade stories, plumbing fixtures and piping as well as the mechanical equipment. The DOB plans come about a year after the museum announced its intention to demolish the folk art building, at 45 West 53rd Street between Fifth Avenue and Avenue of the Americas. Architecture firm The Mufson Partnership, led by designer Christina Powaday, is handling the project. Read more at the Commercial Observer. 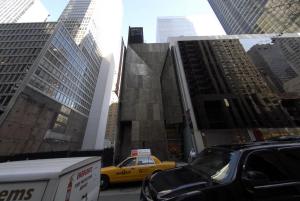