Public opinion of Chris Christie has stabilized after suffering a significant drop when the Bridgegate scandal broke in early January.  The Monmouth University/Asbury Park Press Poll found the governor’s job approval rating hovering just above 50% – similar to his standing in February which had fallen by double digits since his re-election last year.  While a recent report contends that Gov. Christie had no involvement in the toll lane closures, the internal inquiry does not seem to be the cause behind his steadying job ratings.  In fact, most New Jerseyans say the investigation was conducted mainly to improve Christie’s reputation and they actually disagree with many of the report’s findings.

Currently, Gov. Christie’s job rating stands at 51% approve to 41% disapprove among New Jersey residents and 51% approve to 43% disapprove among the state’s registered voters.  His approval numbers are nominally, but not significantly, better than February, when they were 50% among all adults and 49% among registered voters.  They remain 14 points lower than December, before the Bridgegate scandal broke.

Christie receives solid approval from 84% of his fellow Republicans and majority support from 55% of independents.  Only 34% of Democrats approve of his job performance.  These findings are similar to the February Monmouth University/Asbury Park Press Poll.

“The bleeding has stopped for now.  The poll was conducted after the Mastro report was released, but this does not seem to be the reason why Christie’s ratings have stabilized.  In fact, few New Jerseyans agree with the report’s conclusions,” said Patrick Murray, director of the Monmouth University Polling Institute.

Just over half (54%) of New Jerseyans have heard about the report released last week that detailed the findings of an investigation led by Randy Mastro of the Gibson Dunn & Crutcher law firm.  Few (30%) see it as a fair and unbiased investigation of the Governor’s office involvement in the George Washington Bridge toll lane closings.  Instead, most (52%) say the report was done to help Chris Christie’s reputation.

The report seems to conclude that two staff members in the Governor’s office and at the Port Authority of New York and New Jersey were responsible for the closures.  Only 11% of the New Jersey public agree.  More than 3-in-4 (77%) say that others were involved.  This opinion is no different than when the Bridgegate emails first became public.  In January, 80% of New Jerseyans said more people were involved than the staffers who had been identified in the emails and fired by the governor.

The report also clears Gov. Christie of any wrongdoing, but the public verdict is not quite as conclusive.  Few New Jerseyans (32%) feel that the governor has been completely honest about what he knows of the incident.  Most (61%) say he has not come clean.  This opinion is unchanged from February.  In fact, more state residents believe that the governor himself was involved in the decision to close the lanes (47%) than believe he was not directly involved (38%).  The number who believe Christie was involved has declined slightly by 3 points since February, but remains significantly higher than the 34% who felt he was involved shortly after the news broke in January.

The report also dismisses the claims of Hoboken Mayor Dawn Zimmer that she was told by members of the administration that her town would not get Sandy relief funding if the mayor withheld approval of an unrelated development project.  The New Jersey public, though, is not so certain.  In fact, more residents tend to believe (45%) rather than disbelieve (40%) the mayor’s claims.  These results are not too different from the findings of February’s poll when 49% believed the mayor.  Moreover, among those New Jerseyans who are familiar with the Mastro report’s release, a majority of 53% actually believe the mayor compared to just 36% who do not.

“Considering the governor does worse among those who know about the Mastro investigation, it’s possible we could see a negative impact on Christie’s rating as more New Jerseyans become aware of the report’s contents,” said Murray.

In other developments last week, Gov. Christie announced the resignation of David Samson, Chairman of the Port Authority of New York and New Jersey, with the stated reason that Samson wanted to retire.  Only 19% of New Jerseyans believe that was really the motivation.  According to state residents, more probable reasons for Samson’s resignation are that he was involved in either the toll lane or Hoboken issues (36%) or that he resigned as a way to take political pressure off Chris Christie (23%).  Overall, most New Jerseyans (56%) have no opinion of the Port Authority.  Those who do are twice as likely to hold an unfavorable (30%) rather than favorable (14%) view of the bi-state agency.

The poll also found that Chris Christie’s personal ratings remain mixed.  Currently 40% have a favorable view of the governor as a person, 35% have an unfavorable view, and 25% are not sure how they feel about Christie as a person.  These numbers are similar to February.  Matching another finding from February, a majority (54%) of New Jerseyans say Gov. Christie puts his own political future first compared to just 35% who say is more concerned about governing his home state.  Prior to the Bridgegate scandal, more people saw Christie as putting New Jersey first.

In terms of Gov. Christie’s political future, 62% of New Jerseyans say that the Bridgegate and Hoboken issues hurt his presidential prospects for 2016.  This number is up from 51% in January.  Also, state residents are split on how Christie affects New Jersey’s image around the country – 29% say he helps, 33% say he hurts it, and 34% he makes no difference to the state’s reputation.

The Monmouth University/Asbury Park Press Poll was conducted by telephone with 803 New Jersey adults from March 30 to April 1, 2014.  This sample has a margin of error of + 3.5 percent.  The poll was conducted by the Monmouth University Polling Institute and originally published by the Asbury Park Press and its sister publications (Courier-Post, Courier News, Daily Journal, Daily Record, and Home News Tribune). 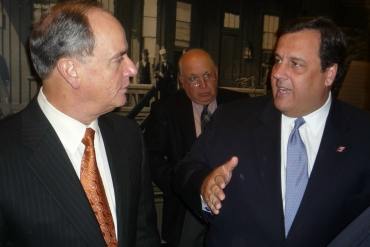