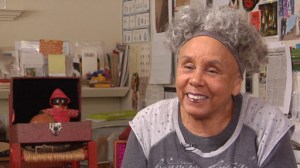 Saar. (© Over the Moon Productions/Getty Museum)

Edward Dolman, who recently stepped down as executive director and acting chief executive of the Qatar Museums Authority, is headed to Phillips. [NYT]

The Guggenheim Bilbao has reportedly forced the removal of a work by Paul McCarthy and Mike Bouchet in the Spanish city, claiming copyright infringement. [Artnet News]

There is an exhibition about “Supersonic,” the debut single of Oasis, in (where else?) London. [The Guardian]

“Who’s Looking Out for Jasper Johns?” [The Awl]

“How to Buy Warhol, Degas and Renoir on the Cheap: One sign of the overheated art market is the growing appetite for minor works by major artists–But are all these etchings and doodles authentic?” [WSJ]

(Image via the Getty)