Headline of the Day: “New York Is Really Desperate to Pretend It’s a Huge Tech Hub.”

The Times took a look at Gov. Andrew Cuomo‘s behind-the-scenes efforts fighting on behalf of charter schools during budget negotiations: “…interviews with state and city officials as well as education leaders make it clear that far from being a mere cheerleader, the governor was a potent force at every turn, seizing on missteps by the mayor, a fellow Democrat, and driving legislation from start to finish.”

Effective NY’s Bill Samuels told Crain’s New York that he will back a primary challenge to State Senate Co-Leader Jeff Klein, if Mr. Klein does not drop his affiliation with the Independent Democratic Conference and rejoin the main Democratic conference soon–and if Oliver Koppell decides to run. “It’s not my first choice, but Klein has a choice to make,” he said.

Mayor Bill de Blasio is set to name Michael Schlein, “a close friend with deep ties to Wall Street,” as the unpaid chairman of the city’s Economic Development Corporation, the Times first reported last night. The paper describes Mr. Schlein, who goes back years with the mayor, as “the banker he knows best.”

Police Commissioner Bill Bratton said he didn’t mean to diss his predecessor, Ray Kelly, when he described morale on the force as ‘awful.’ “It was not meant as a shot at Ray, that is basically just a fact as I understand it,” Mr. Bratton told reporters, according to the Daily News. “I should make it very clear that I have the greatest respect for Commissioner Kelly and Mayor Bloomberg for what they did.”

Mr. Bratton also had some choice words for members of the media, accusing them of “trying to stir up something that’s not actually happening” and “gin this up into a slugfest.” “I’m sorry. He’s a consummate professional. I like to think I’m a professional,” he said of the spat. As for Mr. Kelly: “He knows how the game is played with you guys, as well as I do. … We’ll try to stay out of, basically, giving you additional fuel for the fire.”

Michael Powell offers a cynical take on Mr. de Blasio’s pre-K victory. “O.K. It is a splendid advance, and the mayor deserves credit for his doggedness, not to mention his ability to never lose his grin even as our governor offered a 43-part seminar in intricate ways to humiliate a new mayor,” he wrote “City Hall, however, might consider tempering the stream of triumphal emails, which now seem to arrive in reporter inboxes at a rate of two an hour.”

“For a new mayor, there is the question of lessons gleaned in the Albany fun house. Mr. de Blasio assumed he did well, though he might want to check if he’s missing an appendage,” he went on. “They are our very own Butch Cassidy and the Sundance Kid,” he said of the mayor and governor, “if only Butch would stop shooting Sundance in the knees.”

NY1’s Bob Hardt also weighed in on Mr. de Blasio’s recent “charm offensive” with the press, describing Mr. de Blasio as “the administration’s secret weapon.” “After 12 years of an often-grumpy Bloomberg, de Blasio is the smart and goofy guy you’d like to hang out with in the cheap seats. It also helps the mayor that Gov. Cuomo — the state’s alpha-dog Democrat — seems like the kind of politician that children aren’t allowed to pet.”

And here, via New York True, is footage from the mayor’s press conference yesterday, where he weighed in on the morale question and whether he agrees with parents opting out of Common Core testing:
[vimeo 90817360 w=500 h=281] 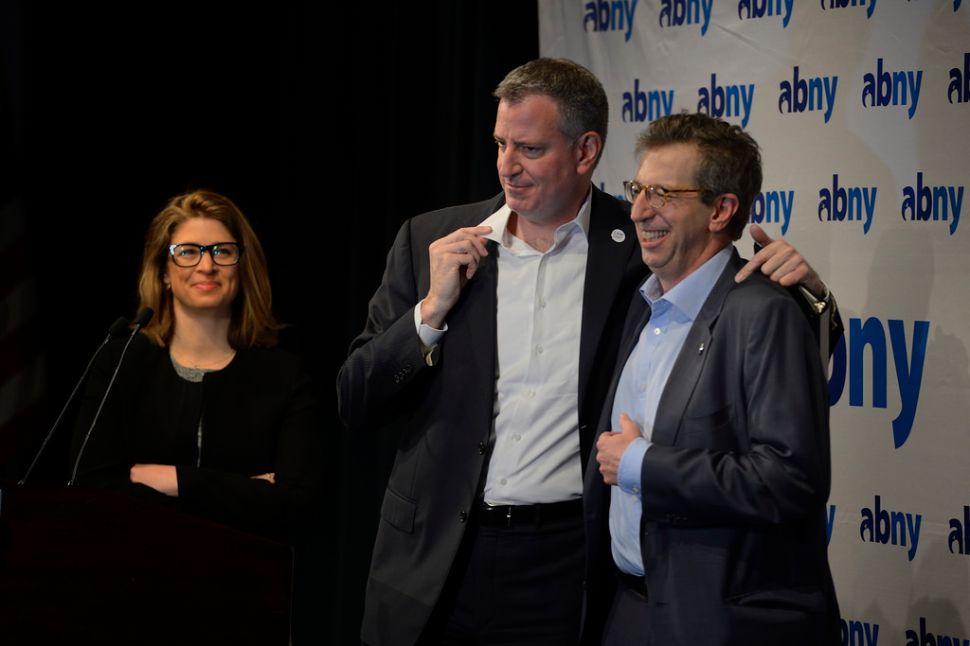