The New York Times and Associated Press further look into how Mayor Bill de Blasio is retooling his press operations. “Though some of de Blasio’s allies have complained the press has focused too much on media issues that matter little to the public, members of the mayor’s inner circle have begun to interact more with reporters, candidly saying that they wanted to improve relations,” the AP reports.

Among the tactics: yesterday’s sit-down with newspaper reporters. “But for all the informality of the occasion, the sit-down had an element of something more deliberate: a re-energized attempt by the de Blasio administration to reboot after a bumpy first few months in office,” writes the Times. “Mr. de Blasio and his team are eager to begin a new phase with the public and the press.”

“Still, there were flashes of Mr. de Blasio’s controlling side … Three of the mayor’s press handlers carefully watched over the conversation; when a reporter from The Wall Street Journal tried to ask a question out of turn, Mr. de Blasio quickly turned to him. ‘Dude, that’s really inappropriate,’ the mayor said, to uneasy laughter. ‘You’ll get your chance.'” the Times continued.

“Mayor de Blasio, oops, make that Bill de Blasio, wants to be on a first-name basis with New Yorkers,” the Daily News reports. “When I’m on the street, people call me ‘Bill’ and I like that,” Mr. de Blasio said during yesterday’s reporter sit-down. “I appreciate that sense of intimacy.”

Mr. de Blasio also did a round of local television interviews, including NY1, PIX11, NBC4 and ABC7. Asked by ABC7 why he just can’t catch a break with the press, Mr. de Blasio replied, “I don’t think it’s about me catching a break or not, it’s about what we’re going to get done for people.” 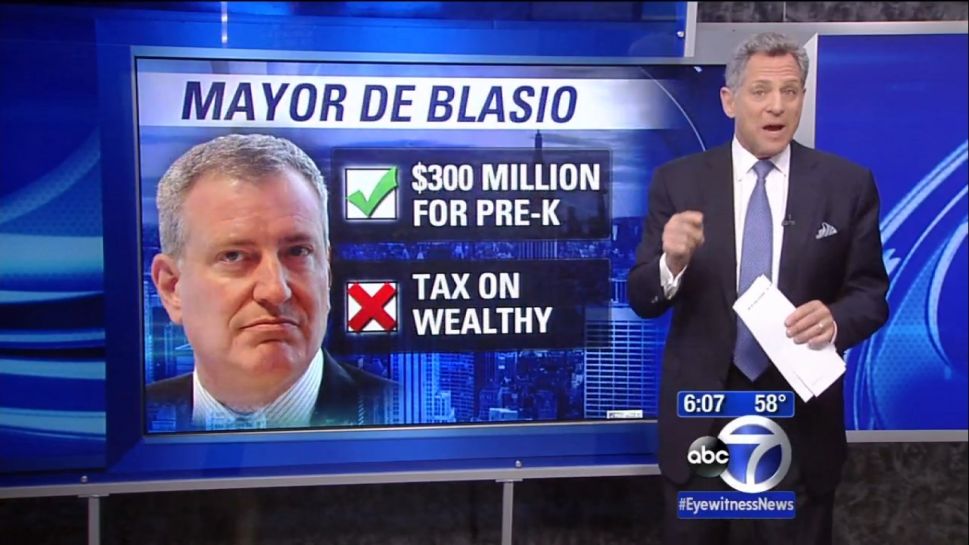