Bloomberg News reports that as a candidate, Bill de Blasio “joined demonstrators on the steps of the New York Public Library on Fifth Avenue to denounce a $300 million renovation of the marble edifice as a dramatic alteration of a ‘crown jewel.’ Now in City Hall with the power to stop the project …. de Blasio hasn’t made a decision.”

The Jewish Daily Forward is also having trouble getting specific information out of City Hall: “It’s been more than one year since New York City announced a new regulation to protect infants from contracting herpes during metzitzah b’peh, a controversial circumcision rite … But the [administration] has refused to respond to multiple requests from the Forward for basic information about how, or if, it is implementing its regulation.”

Mr. de Blasio attended a movie star party Wednesday night, Women’s Wear Daily reports: “Some good news for Mayor Bill de Blasio: Movie stars, at least, seem to like him. The love affair was on display at, where else, the annual party for the Tribeca Film Festival by Vanity Fair, Robert De Niro and billionaire Ronald O. Perelman.”

The New York Times noted Mr. de Blasio’s interactions with Gov. Andrew Cuomo at the event: “The governor and mayor, who have had differences of late, held court at opposite ends of the room, seemingly opting for a policy of benign neglect. But around 9 p.m., Mr. Cuomo made his way over to the mayor’s corner, greeting Ms. McCray with a kiss and then entering a half-hug with Mr. de Blasio.”

The Daily News continued its horse-drawn carriage crusade with yet another cover dedicated to the issue. Today the paper reports that the anti-carriage group NYCLASS is under federal investigation because the group allegedly told mayoral candidate Christine Quinn “that if she didn’t back the proposed ban on carriage horses, they would spend big money on a political campaign attacking her.”

The News also reported that former French President Nicolas Sarkozy is on the News‘ side on the carriage issue: “Save the horses, merci beaucoup … Asked if he thought the horse-drawn buggies should stay in business, he offered an enthusiastic ‘yes.'” They also reported that the horse in a controversial carriage accident is “looking as good as new” and “didn’t suffer a scratch.” 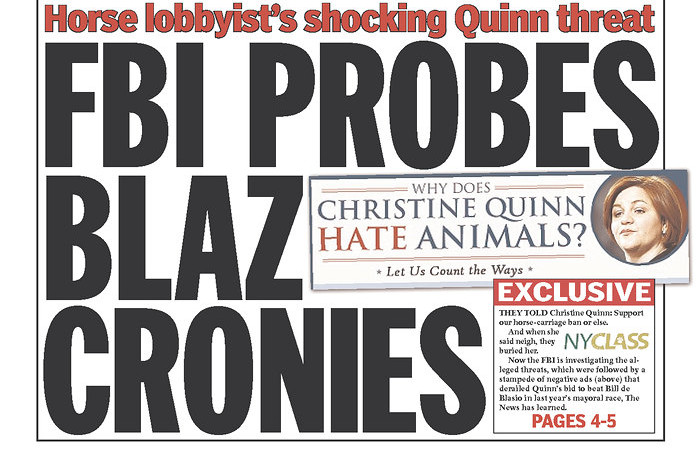