T-Shirt of the Day: “I Barely Survived 100 Days Under Bill De Blasio’s Socialist Tyranny And All I Have Left Is This Lousy T-shirt.”

On the front page of The New York Times, Bill de Blasio today defended his first 100 days in office: “In a wide-ranging conversation, punctuated by a trip to a nearby pizza parlor to silence the mayoral stomach, Mr. de Blasio portrayed his administration as having kept its pledge to combat inequality, an image he plans to emphasize in a speech at the Cooper Union.”

In the same article, the mayor also repeatedly defended his punctuality: “And the notoriously tardy mayor, who arrived 35 minutes late to a midafternoon interview on Wednesday with The New York Times, declared that punctuality was sorely overrated.” “George W. Bush was punctual,” Mr. de Blasio countered. “Unfortunately, he left the nation in worse shape than how he found it.”

Capital New York reviewed 20 de Blasio campaign promises, noting he “has stayed focused on his central campaign theme of tackling income inequality, even as he has struggled at times to convey day-to-day competence.” At least five of the promises have not even started to be addressed and contain reviews like “He has not done anything with this promise yet.”

The Daily News editorial board also weighed in: “One hundred days into his tenure, with the city thus far rendering a split verdict on his young mayoralty, Bill de Blasio is delivering a major speech and an ad campaign to paint a picture of a city on the move. But this moment, above all, demands that our still-new mayor learn the right lessons from the early portion of his term.”

Daily News columnist Joshua Greenman wrote on the topic as well. “So far, the mayor himself has proven to be neither the naïf some pegged him as nor the historic healer some expected,” he argued. “But, to end where we started, it’s early, far too early either to build a statue or stick a pizza fork in the man and call him done.”

Meanwhile, the New York Post editorialized critically on those 100 days: “The point is, the whole 100 days thing is not about Bill de Blasio’s record as mayor of New York. It’s about how he really sees himself: as National Spokesman for Progressivism. And somehow we doubt this is going to help get the snow cleared.”

And, in other news, Gov. Andrew Cuomo‘s administration does not appear to be a fan of the Times, lashing out against today’s report, on criticism against his anti-corruption efforts, by declaring, “The Times’s dependence on anonymous sources is once again turning their stories into fiction.” 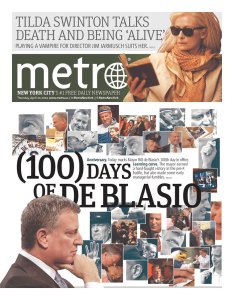