Headline of the Day: “Mike Grimm needed a hug today. Luckily, he got one.”

Political Cartoon Text of the Day: “…and so the gallant Staten Island pol slew the evil Justice witch and was re-elected happily ever after.”

Assemblywoman Nicole Malliotakis is positioning herself to run for indicted Congressman Michael Grimm’s seat, according to the New York Post. “She expressed interest if he commits political hari-kari,” a political insider told the paper. In response, Ms. Malliotakis said, “I remain focused on serving my constituents and, like other residents in the district, am waiting to learn more [about Grimm].”

In an article–titled “Grimm’s meteoric rise was too good to be true”–the New York Post also explored some of the weirdness surrounding Mr. Grimm’s original run for Congress in 2010. “We tried to understand how a guy who was in the FBI for 17 years suddenly retires to open a juice stand,” said one Staten Island Republican source. “No one retires at 17 years.”

Mr. Grimm gave up his spot on the House Financial Services Committee yesterday, the Staten Island Advance reports. “I am proud of my committee accomplishments,” Mr. Grimm said in a statement. “It is unfortunate that trumped-up charges filed against me have necessitated this action but this was an appropriate decision that ensures the committee’s legislative agenda is not distracted.”

The Daily News editorial board called on Mr. Grimm to give up his seat and for Republican operatives to “find a loophole” to get someone new on their ballot line: “If Michael Grimm cares as much about the people of Staten Island and Brooklyn as he claims to, he will step aside now and let someone else give their undivided attention to serving the 11th Congressional District.”

But Mr. Grimm still does have some defenders. Republican Congressman Pete King blasted the Justice Department for their years of leaks against his colleague. “The Justice Department has handled this really in a very shameful way,” Mr. King told the Daily News before House voted Monday evening. “They have violated all the ethical codes. Right now they are more guilty than he is.”

The exact charges against Mr. Grimm also struck some legal experts as a bit odd, as many expected campaign finance charges instead relatively ordinary tax evasion allegations. “Obviously, they could not find any irregularities for accounting in [Grimm’s] campaign, so they went after this. Without a doubt, it’s politically motivated,” one lawyer told the Staten Island Advance.

Mr. Grimm’s indictment has even made waves in other races around the country. Former Congressman Frank Guinta, a New Hampshire Republican running again, returned $2,500 Mr. Grimm gave his campaign in 2012, according to NH Journal.

And here’s video, via the Staten Island Advance, of local residents reacting to Mr. Grimm’s indictment: 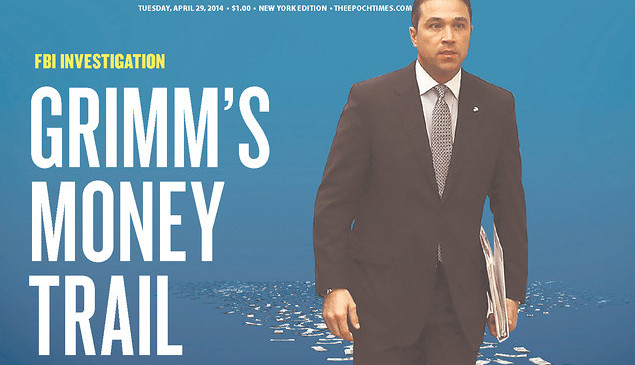