Yesterday’s revelation that James Franco, the Benedict to my Beatrice, had flirted with a high-schooler over Instagram, has naturally sent me spiraling over the edge of despair. Especially since, hey now, all MY messages to Mr. Franco, over various forms of social media, have been ignored. (By the way, how does one engage on a direct chat on Instagram? Just asking, for a friend.)

This was part of Mr. Franco’s original message to a Scottish 17-year-old: I decided I would try to engage with a similar tactic as this young woman had; appealing to his vanity of playing in Of Mice and Men on Broadway. Now, the cleverest among you may have noticed that these last several messages were “rejected.” Was that because James was playing hard to get? Possibly. Was it because I didn’t really have his phone number or any way to access him really, and had just typed the words “James Franco” into my phone? (Although if I was like five years older I’m pretty sure I would believe that was how iPhones worked.) Mayhaps.

But just in case, I decided to take my cause across platforms. Twitter took too long uploading my selfies: Finally, I just went straight to Mr. Franco’s favorite micro-community site and uploaded my own picture on Instagram. So far, I haven’t gotten any responses. But he’s a very busy guy. I’ll give it another 20 minutes before I start getting on him over SnapChat and Tinder. After all, he did just spend the day on Michael & Kelly, talking about how he’s a “model of someone who knows how to use social media to convince the world that he’s straight how social media is tricky.”
[youtube http://www.youtube.com/watch?v=jWQGECiTpOE&w=615] 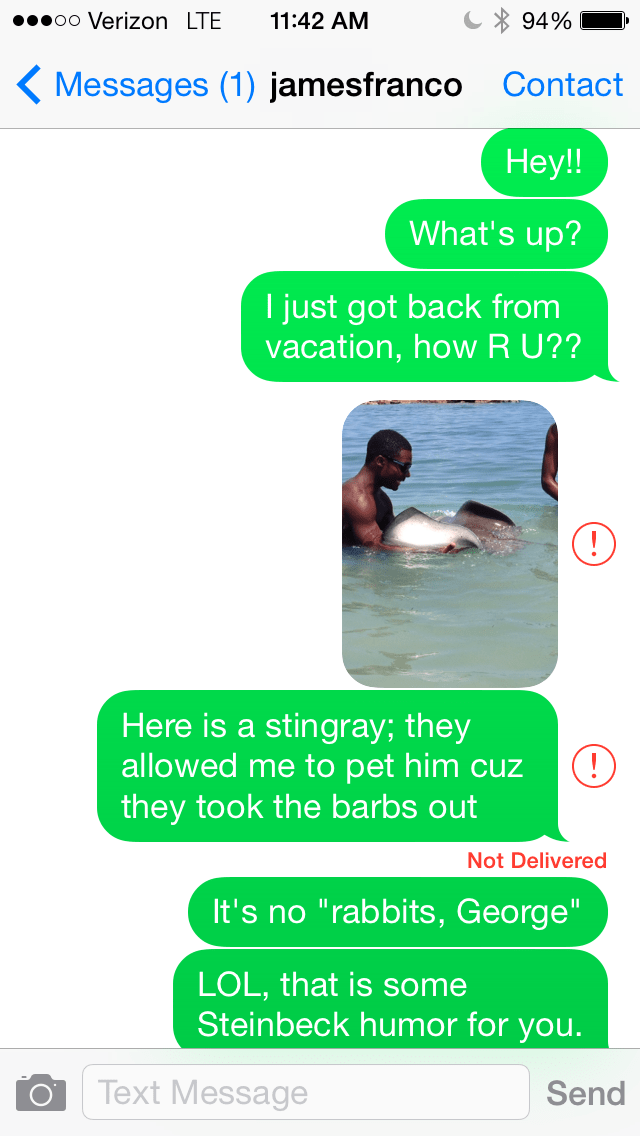