NEWARK – The fundraiser for Newark mayoral candidate Shavar Jeffries, held at the Newark Club  downtown on Thursday night, offered the approximately 150 participants eye-widening views of the city Jeffries wants to govern, as well as New York City to the east.

If one squinted, the borough of Brooklyn could be seen in the distance. While DJ Ran sampled The Notorious B.I.G.’s rap song “Where Brooklyn At,” one of Brooklyn’s representatives in the U.S. Congress took the microphone to support someone with the same last name.

“This is a city that I feel intimately connected to because of my own family background,” said U.S. Rep. Hakeem Jeffries (D-NY8), whose district encompasses parts of Brooklyn and Queens. “My father was born and raised in Newark and went to Barringer High School. Shavar supported me from a very early stage, when I ran for the [New York] state Assembly. I’ll never forget that. Our areas codes are different, but the issues are largely the same. When you send him to City Hall, he’s going to stand up for Newark.”

In an interview with PolitickerNJ.com, Congressman Jeffries, who is a distant cousin of the Newark mayoral candidate, outlined why he believes his relative is the best candidate to run the state’s largest city.

“Shavar has the authenticity to win a race in a close-knit city like Newark that is also increasingly diverse,” Hakeem Jeffries said. “As a son of Newark, he experienced many of the challenges that people growing up now have to deal with in Newark. The formula exists, connected to the narrative of his life story and trajectory, that hopefully will result in a victory next month.”

A critical policy narrative in this year’s mayoral election centers around the future of Newark’s schools. The question of the role of charter schools has become a critical part of the debate regarding this future.

The One Newark school reorganization plan, announced by Newark School Superintendent Cami Anderson in December, includes the expansion of charter schools, which already serve approximately 20 percent of the city’s students, as well as the closure or consolidation of certain public schools.

The most recent 29-day re-election campaign fund reports that were released earlier this month by the New Jersey Election Law Enforcement Commission (ELEC) included a report on the pro-Jeffries independent expenditure fund, known as Newark First.

The largest contribution to the pro-Jeffries Newark First group came from Education Reform Now, who donated $850,000.

Members of the Education Reform Now group, including board members who have experience working at high-powered Wall Street hedge funds, are active in the Success Academies network of charter schools.

But Congressman Jeffries pushed back against the idea that both himself and his Newark mayoral candidate cousin are dependent on these types of donations.

“We raised money from a wide variety of sources. We probably raised about $1.2 million [in Jeffries’ 2012 Congressional campaign], and I would say 95 percent of the money we raised came from sources other that the education reform movement,” Hakeem Jeffries said. “It’s not clear how anyone could with any degree of intellectual integrity characterize us as being overly reliant on charter school donations.”

“This is not going to be easy. It’s not supposed to be,” he said. “This campaign is going to be hard. It’s going to be difficult. And it should be, because we want to do great things for our city and for our people.” 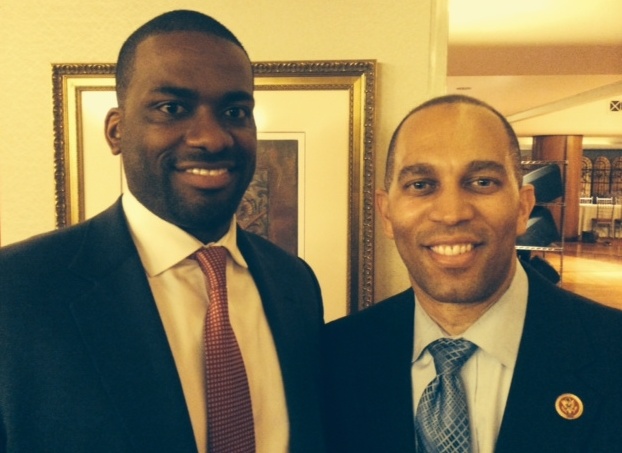