NEWARK – Newark mayoral candidate Shavar Jeffries responded to concerns raised following the issuing of an arrest warrant on Monday by the Essex County Prosecutor’s Office for a man who police believe set fire to the campaign bus of rival candidate Ras Baraka in February. The arson suspect, Michael Benkowski, 43, of Newark, is wanted in connection with the torching of the bus, according to the Prosecutor’s Office. Benkowski is currently at large.

“As a former State Assistant Attorney General, I believe there should be a thorough investigation of this latest episode, to include all parties in question, as well as threats and acts of intimidation against my supporters at taxpayer expense,” said Jeffries in a written statement. “I have nothing to hide, and neither should my opponent.

“I have complete confidence in our investigative authorities and will let the facts take us where they may.

“The fugitive in the arson matter should turn himself in immediately and face the authorities. Actions have consequences and I strongly condemn any form of vandalism, violence, or acts of intimidation, no matter what side of the fence you’re on in a political campaign.”

The Jeffries campaign has confirmed that Benkowski worked for their campaign.

Both the Jeffries and Baraka campaigns have claimed that their opponents have engaged in voter intimidation, misconduct and corruption. Baraka filed a lawsuit in Essex County Superior Court on Monday calling for the removal of two Jeffries supporters from the Essex County Board of Elections, claiming violations of election law and ethics codes.

“The other day my campaign called on U.S. Attorney [Paul] Fishman to monitor Newark’s municipal election because we cannot allow any form of voter suppression to interfere with a fair and open election,” Jeffries added, referring to the Jeffries campaign’s call on Monday for relief from what they claim to be “intimidation and duress” from Baraka supporters. 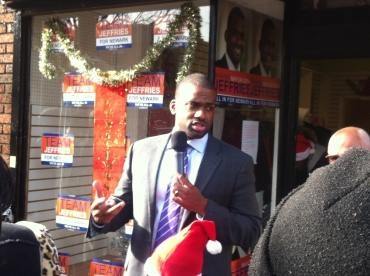