Biblical references were perhaps appropriate with just 37 days to go before the Newark mayoral election in May. And after the past week, the Jeffries’ campaign could be forgiven for looking to the skies.

An arrest warrant was issued Tuesday for Michael Benkowski, 43, of Newark, in connection with a February incident in which the campaign bus of Ras Baraka, the South Ward councilman who is Jeffries’ rival in the mayoral race, was torched in front of Baraka’s Central Ward campaign headquarters on the 400 block of Central Avenue.

The van was located on March 7 when it was pulled over near the corner of Morris and Central avenues in Newark. The van was being driven at the time by Shareef Q. Nash. 35, of South Orange. Nash has not been charged with any crime. The vehicle is registered to Prestige Professional Management,LLC, of Newark. It is alleged that Benkowski used the van in connection with the torching of the Baraka campaign bus, according to the Prosecutor’s Office. Benkowski was arrested on Friday.

A copy of a January 2014 New Jersey Election Law Enforcement Commission (ELEC) report filed by the Jeffries campaign listed a name that closely resembles that of Benkowski.

The name Michael Benkoski appears twice on the ELEC report for canvassing services performed for the Jeffries team in December 2013. The total amount paid to Benkoski listed for these services is $450. The same report lists Nash as being paid more than $4,300 in campaign consulting expenses by the Jeffries campaign.

In response to questions from PolitickerNJ.com about the ELEC report, the Jeffries campaign said that they do not deny that Benkowski worked for them.

On Tuesday, Baraka went further in his claims about the Jeffries campaign’s involvement in the alleged arson incident.

Katherine Carter, the public information officer for the Essex County Prosecutor’s Office, reiterated that the van is registered to Prestige Professional Management, LLC, which has a post office box address in Newark, and that Nash “is connected to that company.”

At the Jeffries’ campaign West Ward rally on Saturday, Sharif had no comment regarding Baraka’s allegations.

Earlier in the week, Jeffries called for a “thorough investigation” of the investigation and for the alleged arsonist to “turn himself in.” On Saturday, Jeffries was circumspect about the last week’s events.

“Campaign are marathons, There are going to be great weeks, and there are going to be bad weeks. There is nothing to recover from,” Jeffries told PolitickerNJ.com in reference to a week that included independent expenditure money kicking in with the campaign’s first cable television ad. “The voters care about safe streets and neighborhoods, job opportunities, getting their babies to and through college and decent housing. We are very confident about the reaction we are getting from the people.”

“[Baraka] has been councilman for four years. What is the record?” Jeffries added. “I don’t know what results my opponent has. I would love to hear them.” 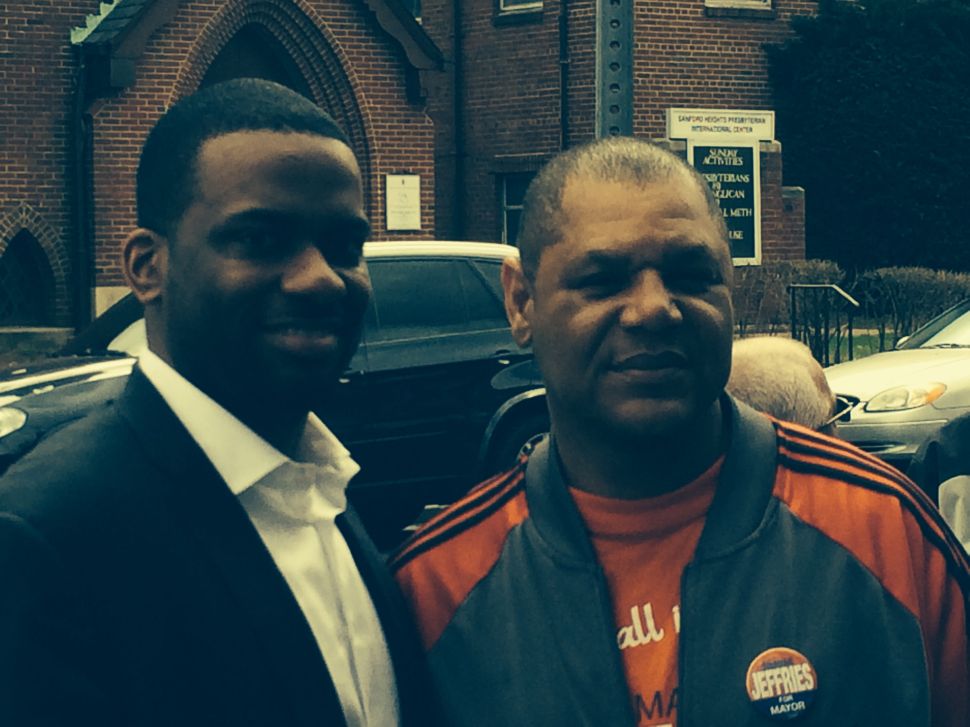